Fact Check: Would Biden’s Spending Bill Hike Taxes on Those Making Less Than $400,000? 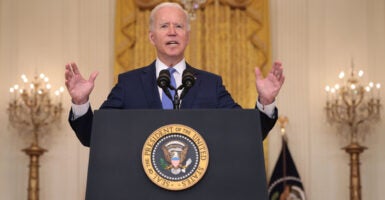 Despite President Joe Biden’s promises, millions of middle-class families will see their tax burdens grow. Pictured: Biden speaks about the economy, taxes, and the middle class during an event on Sept. 16 at the White House. (Photo: Win McNamee/Getty Images)

Biden even put his family honor on the line, tweeting, “I give you my word as a Biden: If you make under $400,000 a year, I’ll never raise your taxes one cent.”

But now that the official nonpartisan congressional scorekeepers have reviewed Biden’s tax legislation, we know that the president’s pledge fails a fact check. Millions of middle-class families will see their tax burden grow.

Here are the facts:

Nearly 6 million taxpayers taking home less than $100,000 per year would see their taxes go up in 2023 under the Biden legislation.

Biden would even hike taxes on hundreds of thousands of families earning less than $20,000 per year.

And things get worse for the middle class the longer Biden’s tax increases are on the books. By 2027, more than half of all families earning $75,000 to $100,000 would see their taxes go up by a total of more than $3 billion.

Biden’s claim that anyone earning less than $400,000 per year would not see a tax increase just isn’t true.

Of course, this should surprise no one. It would be mathematically impossible to fund the liberal spending agenda by only raising taxes on high-income individuals.

Even if the government confiscated 100% of the income of everyone who earned more than $1 million in 2018—when the economy was going full throttle—it wouldn’t cover half of Biden’s government expansion.

Biden says his legislation is “going to make those at the top start to pay their share in taxes. It’s only fair.”

But high-income Americans already pay the majority of the total tax burden because the U.S. tax code is already very progressive. The top 10% earn 48% of the income and pay 71% of federal income taxes. Meanwhile, the bottom 50% of earners pay just 3% of income taxes.

Biden’s spending spree is paired with the largest tax increase in more than 50 years, clocking in at more than $2 trillion in higher taxes.

These tax hikes would be permanent, while many of the new spending programs only get temporary funding in order to game budgetary rules. Actually paying for the permanent expansion of government proposed by Biden would require even higher taxes.

It would, for example, reverse the 2017 tax cuts for some individuals and add new surtaxes for high-income earners. The taxes on savings and investment would also be hiked, as would the death tax.

In addition, taxes on small businesses that typically pay individual income taxes would go up, thanks to Biden’s plan. And the federal tax rate on American corporations would be raised to 26.5%, even higher than the 25% corporate tax rate imposed by the Chinese Communist Party.

These taxes on employers would hit real people in their wallets. When the government raises costs by hiking taxes, it gets passed on to workers with less pay, shareholders with lower value in their retirement accounts, and consumers with higher prices.

These tax increases would take more money out of the hands of the people who earned it and instead put it under the control of politicians and bureaucrats.

An agenda so radical as transforming the largest and most prosperous economy in the history of civilization has an enormous cost, notwithstanding the White House attempting to claim that its multitrillion-dollar tax and spending package somehow “costs zero dollars.”

That doesn’t pass the laugh test, much less a fact check.

The simple truth is that despite Biden’s promises, taxes on middle-class Americans would be higher if his tax increases are enacted.

Biden’s statement that no one making under $400,000 would see a tax increase is false.

This article originally appeared in The Sacramento Bee.