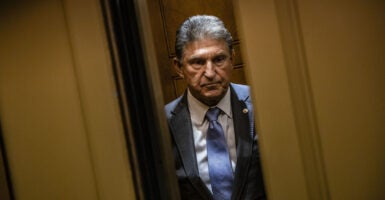 Sen. Joe Manchin. D-W.V., heads to a vote in the Senate on June 8. Manchin said Sunday that he would vote "no" on President Joe Biden's Build Back Better plan. (Photo: Samuel Corum/Getty Images)

A single Democrat came out against President Joe Biden’s massive, multitrillion-dollar Build Back Better plan and the left is having a collective conniption.

Sen. Joe Manchin, D-W.V., said Sunday that he would have to cast a “no” vote for Democrats’ current Build Back Better bill, a version of which already has passed the House.

“I cannot vote to continue with this piece of legislation. I just can’t. I’ve tried everything humanly possible. I can’t get there,” Manchin told host Bret Baier on “Fox News Sunday.”

“This is a no on this legislation,” the West Virginia Democrat said before addressing the rise of the omicron variant of COVID-19:

I have tried everything I know to do. And the president has worked diligently. He’s been wonderful to work with. He knows I’ve had concerns, and the problems I’ve had. And, you know, the thing that we should all be directing our attention towards [is] the [omicron] variant … that we have coming back at us in so many different aspects, in different ways. It’s affecting our lives again.

His support would have given Senate Democrats the opportunity to get around a filibuster by Republicans and pass the spending bill, with Vice President Kamala Harris breaking a 50-50 tie.

Without Manchin’s support, it is unlikely the legislation will get to Biden’s desk.

The legislation is certainly ill-conceived.

As Preston Brashers, a tax policy analyst at The Heritage Foundation, wrote in October, the plan “is a $3.5 trillion patchwork of taxes, mandates, job-killing regulations, and social welfare entitlements that will only exacerbate the supply-side issues plaguing the economy.” (The Daily Signal is Heritage’s multimedia news organization.)

The total cost has been reduced some since then: It’s a mere $2 trillion now. What a bargain!

Democrats’ legislation is not just full of exorbitant spending. It would move the country closer to full-blown government-run health care and dump huge amounts of money into other left-wing social and economic priorities.

This as inflation has become a seriously concerning issue for most Americans.

The Build Back Better plan’s backers have insisted, despite the immense price tag, that the legislation somehow would stem inflation. Of course, the Biden administration also said it would cost “$0,” so it’s hard to take such proclamations seriously.

The bottom line is that Democrats’ spending bill has some major problems. Nevertheless, the Biden administration and Democrats in general put a lot of political weight into getting it passed.

Given the sheer number of other political failures since Biden and Harris took office Jan. 20—on the economy, Afghanistan and elsewhere in foreign policy, the southern border, and so many other areas—it’s clear that Democrats wanted something to end the year with a “win.”

Some Biden cheerleaders in the media are declaring the potential failure of the Build Back Better legislation as the end of democracy in America.

Can you, dear reader, ever remember a single Democrat Party setback in your lifetime that wasn’t said to be the end of democracy? I sure can’t.

Although the left always has stewed about the Senate, its anger gets selectively more intense every time the Senate’s rules and structures don’t favor it in a specific case.

Remember when the late Sen. John McCain, R-Ariz., was a hero for defeating Republicans’ attempt to repeal Obamacare in 2017 by flipping his vote to side with Democrats?

No such words from Schumer, now majority leader, and other Democrats about Manchin.

White House press secretary Jen Psaki essentially called him a liar, saying: “Just as Sen. Manchin reversed his position on Build Back Better this morning, we will continue to press him to see if he will reverse his position yet again, to honor his prior commitments and be true to his word.”

The House’s far-left “squad” is having a complete meltdown, of course.

“It’s a farce in terms of, you know, plain democracy, because I represent more—or just, just as many or more people than Joe Manchin does, perhaps more,” Ocasio-Cortez said.

The New York Democrat was wrong by more than half. West Virginia has well more than twice the population of her Bronx-based district.

Not to mention the fact that despite her win in a deep-blue Bronx district, Ocasio-Cortez almost certainly would have no chance of winning a statewide race in New York, let alone West Virginia.

The attacks on the Senate from the left are tedious.

The Senate is, by most measures, a “democratic” body. Citizens of their respective states vote for senators directly these days.

What Democrats appear to have problems with are federalism, the rules of the Senate, and ultimately the Constitution.

As always with the left, any institution that it doesn’t have complete control over, it seeks to destroy.