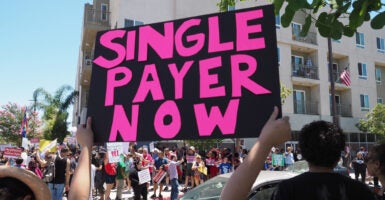 As negotiations over the staggering $3.4 trillion “Build Back Better” plan price tag continue to raise concern, the health policy agenda put forth in the plan is equally alarming.

At first glance, some might argue the Build Back Better plan takes a more modest approach on health care by avoiding the inclusion of a full-blown, government-run, single-payer proposal. Yet, the various health care provisions in the proposal taken collectively expose an agenda to use a public option to pave the way to single-payer health care.

Instead of “Medicare for All,” a congressional proposal to outlaw private insurance and put everyone on a government-run health plan, Build Back Better takes key steps in that direction. The proposal focuses on reinforcing and expanding the Affordable Care Act footprint by removing the income limitations on subsidies, making the existing Affordable Care Act subsidies more generous and creating a new, federal, Medicaid-like option.

Much of this incremental path to government-run health care hinges on the creation of the new Medicaid-like government option. The Build Back Better plan starts small by targeting this new federal program only to those individuals who reside in states that have chosen not to adopt the Obamacare Medicaid expansion.

After a transitional period, the secretary of the Department of Health and Human Services would contract with two entities to administer the government option (most likely a boon for existing Medicaid managed care plans). The benefits requirements under this new program would broadly follow those outlined under Medicaid and there would be no cost-sharing requirements for participants.

With the federal infrastructure in place, the next phase would be to gradually open access to the government option. The legislation already anticipates expansion. It includes language to realign federal payments to allow states that expanded Medicaid under Obamacare to enroll those individuals in the government option.

The bill would also move those individuals who are in the exchange but would otherwise qualify for Medicaid under the Obamacare expansion into the government option.

The bill also creates a ready reserve of potential enrollees for the government option by expanding the number of individuals that would be eligible for subsidies in the exchange by lifting this income restriction and loosening restrictions to allow those with access to employer coverage to enroll in the exchange.

Under the rules of new program, the secretary has broad authority to administer and run the program. This means the secretary can tilt the rules in favor of the government option by making the government plan appear (at least on the surface) to be more generous and more affordable than the private competitors.

For example, the bill allows the secretary to set payment rates below private competitors. While providers might balk at the lower payment rates and refuse to participate, other government option proposals allow the secretary to require providers to participate in the public option. So, it is not out of the realm of possibility that these hard tactics could be applied under this plan as well.

Without meaningful reforms, costs and premiums will continue to rise in the Obamacare exchange. The Obamacare system today gives insurance companies more taxpayer money every time they raise prices—a recipe for the higher costs and fewer and worse choices we’ve seen in the program. Rather than take this problem head-on and address the government policies behind it, this new program papers over it with more big government.

The single-payer “solution” of course would be to open access to the government-run option. This would drive private competitors out, leave the government option as the only option, and open the gate to single-payer.

Of course, this is where the fantasy of single-payer meets reality. Generous benefits would increase demand and increased demand would increase costs. Either politicians would have to increase taxes—with some estimates predicting the need for an additional 20% payroll tax—or would begin to ration access to care as done in countries with single-payer models.

While it may appear that the push for single-payer has faded, the reality is that the Build Back Better plan continues to set a path to single-payer on the installment plan.