Don’t Blink or You’ll Miss It: The Left Quietly Puts in Place Everything It Needs for Single-Payer System 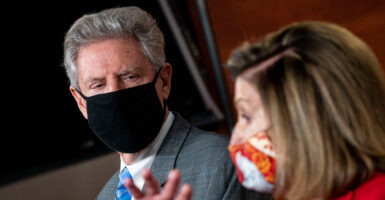 The House of Representatives will hold a hearing tomorrow titled “Building on the ACA: Legislation to Expand Health Coverage and Lower Costs.” This hearing further confirms the left’s commitment to a single-payer health care model is alive and well.

This hearing will be held by the House Energy and Commerce Committee, and is intended to mark the passage of the Affordable Care Act, or Obamacare, which was put into place 11 years ago.

The hearing will come on the heels of the passage of the Families First Act and the American Recovery Act—both of which made significant changes expanding the federal government’s role in health care.

The American Recovery Act—the Biden administration’s $1.9 trillion response to COVID-19—dramatically increased the federal scope of Obamacare. Particularly, it made subsidies more generous for those already eligible for subsidies, expanded access to subsidies further up the income scale, and limited premium exposure as part of overall household income.

There is likely more to come. Rep. Frank Pallone, D-N.J., chairman of the Energy and Commerce Committee, and others on the outside have indicated interest in making those temporary expansion provisions included in the COVID-19 relief packages permanent.

The Biden administration is already considering rolling back Trump-era flexibilities in Medicaid and Obamacare. There is also a recommitment for a government-run option—the so-called public option—as well as for a full-blown single-payer plan.

These actions and the proposed legislation in the House highlight the next phases in the left’s playbook:

First, use federal funding to mask the real costs of the plan. Liberals plan to do this by throwing subsidies at both insurers, to hide the cost of coverage, and at the states, to coerce them to expand their already overstretched Medicaid programs.

Finally, strip away flexibility by linking federal dollars to federal policies. The more federal control of the dollars, the more federal rules and restrictions. The result is a one-size-fits-all federal standard.

The bottom line is this: Recent legislative acts, administrative actions, and proposed bills all have the effect of putting into place many of the mechanisms needed for a single-payer system. The best way to stop these efforts is with a better plan.

A plan that protects the policy gains over the last four years, gives people—not the government—the power to choose the kind of coverage they want, and gives the states the tools and resources to block federal consolidation and overreach is the only way we can give America the health care system it needs.