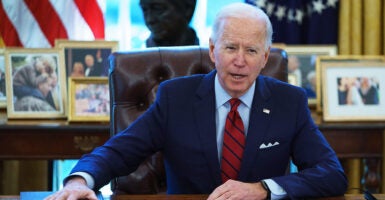 The American Recovery Act, the Biden administration’s $1.9 trillion response to the COVID-19 pandemic, includes a $40 billion down payment on the president’s plan to “build on Obamacare.”

The bill’s expansion of Obamacare—also known as the Affordable Care Act—has nothing to do with the pandemic, would do little to increase health insurance coverage, and may create disincentives for unemployed people to return to work.

Most of the new spending will benefit those who already have heavily subsidized Obamacare coverage. For example, a 40-year-old with income of 150% of the federal poverty level ($19,320) currently pays around $67 per month for insurance (4.14% of income). The federal government pays the enrollee’s insurance company the balance, an average of $384 every month.

The bill would reduce the enrollee’s monthly premium to $0, with the federal government sending the insurance company a check for $451, a 17% increase on behalf of a person who already has subsidized health coverage.

The American Recovery Act would also create subsidies for people who earn too much to qualify for government assistance under current law. Those subsidies are now available only to those with incomes between 100% and 400% of the federal poverty level ($12,880 to $51,520 for an individual). The bill would eliminate the income cap, creating a new entitlement for people in the top two income quintiles.

According to the Congressional Budget Office, these expansions would increase the deficit by $34.2 billion over the next two years, but would do little to reduce the number of uninsured. Roughly two-thirds of that amount would benefit people already enrolled in Affordable Care Act plans.

The increased subsidies would induce an estimated 400,000 people to drop their unsubsidized insurance coverage and switch to subsidized policies sold through the exchanges, according to Congressional Budget Office.

The new subsidy regime would be effective retroactive to Jan. 1 of this year and sunset on Dec. 31, 2022. While limiting these increases to two years masks the full cost of these expansions, lawmakers will feel tremendous political pressure to extend them, pushing the final cost still higher.

The Congressional Budget Office notes that most who will take advantage of this new benefit “would have otherwise enrolled in another form of coverage.” Most of the spending would be used to entice people with private coverage into the government-subsidized health insurance exchanges, rather than to reduce the ranks of the uninsured.

Although the Congressional Budget Office claims the new benefit would “affect the incentives of most recipients to take a new job,” the size of the subsidies could become a potent work disincentive.

For example, a 40-year-old unemployment insurance recipient would receive subsidies valued at $451 per month, or $5,412 per year, in addition to cash unemployment benefits—which includes a $400 per week federal bonus under the American Recovery Act.

The recipient would lose this benefit if he returned to work and had to bear most or all of the cost of his health insurance premiums (or drop his coverage entirely).

Moreover, maintaining health insurance is one reason workers hang onto their jobs, at least until they find new ones.

The prospect of free health insurance would not only eliminate this work incentive, but when coupled with the additional $400 per week unemployment bonus proposal, would make many individuals financially better off unemployed than working.

This added work disincentive in the American Recovery Act could impede economic recovery and hurt unemployed workers in the long run by reducing their employment and income prospects.

The administration’s decision to establish a new open enrollment season from Feb. 15 through May 15 will likely exacerbate the bill’s fiscal effects. People who already have coverage, including the unemployed, will be able to switch to government-subsidized insurance over those three months.

The rationale for this Affordable Care Act expansion is dubious. Advocates claim that more government spending is needed because millions of people have lost health insurance coverage during the pandemic.

But a study by Edmund Haislmaier of insurance company regulatory filings shows that insurance coverage has remained stable through Sept. 30, 2020, the most recent data so far reported.

Coverage in the fully-insured small group market is off slightly, but there was also an uptick in the number of people with individual health insurance. Meanwhile, Medicaid enrollment grew by nearly 5 million over the first half of 2020, more than offsetting modest enrollment losses in the private insurance market.

The Obamacare expansions are thus a solution in search of a problem, a costly and unjustified government incursion into health care that neither addresses the pandemic nor boosts economic recovery.