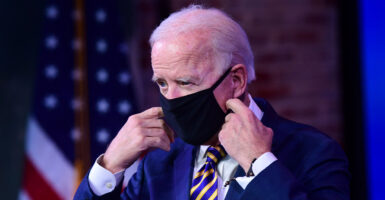 With Georgia’s special Senate runoff election results showing Republicans are going to lose their majority in the Senate, presumptive President-elect Joe Biden is likely to face a lot less resistance fulfilling his promises of creating a public option in Obamacare.

Additionally, with polls showing nearly two-thirds of Americans approving of a public option, the threat of a single-payer health care system is one step closer to becoming a reality.

If Biden’s health care plan was ever to be realized, it would be a total disaster, as I can attest from my own experience.

On its surface, having reliable insurance coverage with low premiums is an attractive concept many pandemic-stricken Americans can get behind. Unfortunately, that concept is just a mirage concealing unreasonable tax hikes and an eventual segue to a single-payer health care system that will prolong wait times.

In the final analysis, the public option is just a slow-baked single-payer system in disguise.

Every devised single-payer system raises taxes. It’s unavoidable. Even the 2016 plan from Sen. Bernie Sanders, I-Vt., would have cost the federal government $30 trillion just to implement. And for what? The supposed savings Americans would receive from not paying monthly insurance bills would most likely shift to covering the 36.5% increase in payroll taxes that would be required to fund Sanders’ plan.

To be precise, the typical American household would lose an annual average of $5,671 in disposable income, according to a November 2019 special report from The Heritage Foundation, “How ‘Medicare for All’ Harms Working Americans.”

In addition, the public option is inherently disposed to transfer power to the government. For example, Washington state’s public option, Cascade Care, is only able to maintain lower premiums because the state caps its reimbursement rate at 10% below individual-market insurers’ rates.

Since health care providers can’t negotiate with the state, they shift costs onto private insurers to make up for the loss of revenue. Encumbered by additional costs, private insurers are forced to raise their rates. That in turn compels consumers to ditch their private insurance for Cascade Care, thus perpetuating a vicious cycle that continually grows the government’s presence in the insurance market.

As the current American health care system stands, it sounds momentous to switch to a single-payer plan, but if millions of people are already under some form of government-administered insurance, the jump to a single-payer system becomes a lot more feasible.

Before blindly accepting another government-run health coverage option, Americans should review problem-riddled programs in their backyards.

Just look at the vulnerable low-income populations on Medicaid that are being dismissed or forced to endure ludicrous wait times for elective surgeries.

Due to the way Medicaid reimburses doctors for a fraction of their fees and the fact that the Affordable Care Act does not mandate physicians to operate on elective surgeries, doctors tend to delay procedures for Medicaid enrollees until they can get a better reimbursement rate.

Unfortunately, for me, that’s not just an abstraction. It’s something I’ve lived through personally. I tore my ACL playing football at George Fox University. Since I was injured in Oregon, my parents’ Washington-based health care plan wouldn’t cover me. So, I was left to the loving embrace of Oregon’s Medicaid program—which meant my ACL reconstruction surgery was delayed for nearly four months.

The reason for the holdup? The Oregon Health Plan reimbursement rate was offering only about 63% of the cost of the procedure. As a result, doctors delayed MRI scans and the pre-assessment appointment for surgery. It wasn’t until my team’s athletic trainer and head coach appealed to one of the local orthopedic surgeons to work for the Oregon Health Plan rate that I underwent surgery.

For comparison, consider my teammate, Mitchell Lemos, who tore his ACL just eight days after my injury. Lemos was on the Kaiser Permanente Point of Service II plan, a well-known private health insurance plan in Oregon. Unlike me, Lemos underwent surgery the following weekend.

Even though I was spared from out-of-pocket costs, the four-month wait time left me with mobility complications, increased my risk of arthritis, and actually resulted in a minor meniscus tear because my leg gave out while walking down the stairs.

Americans should be free from unreasonable wait periods, and that freedom resides outside of single-payer systems and slippery-sloped public options.

My experience with the inefficiency of government-sponsored health care is tame compared with those of others.

In 2014, the government-run Department of Veteran Affairs was subjected to an internal audit that revealed 35 veterans died while waiting for coverage approval for medical services. Another audit undertaken in the same year showed that more than 120,000 veterans either waited 90 days for an appointment or were denied getting an appointment at all.

In the United States, it’s clear. Government-managed health care programs engender longer wait times and prolong suffering, which has drastically diminished our health care system’s ability to protect Americans’  health resiliency. Swift delivery of care and the ability to return to health after a medical emergency is an absolute necessity for thriving in today’s American workforce.

And it’s the same abroad. For example, Britain’s National Health Service guidelines state, “The maximum waiting time for non-urgent, consultant-led treatments is 18 weeks from the day an appointment is booked.” Yet, last year, National Health Service hospitals canceled 4,076 emergency procedures and more than 50,000 non-urgent elective surgeries, sometimes on the day of the scheduled treatment.

Even our own neighbor, Canada, has a staggering average wait time for arthroplasty surgeries that ranges from 20 to 52 weeks.

Time and again, single-payer health care systems have produced complications and slowed access to quality care, both at home and abroad. Biden’s public option may carry promises of an improved American health care system, but what good is an alleged panacea if it arrives months too late?