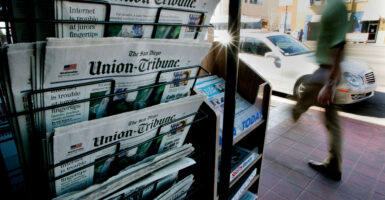 The massive spending bill, currently being debated in Congress, would include significant financial assistance for media companies. Pictured: Copies of The San Diego Union-Tribune at a newsstand March 18, 2009, in San Diego. (Photo: Sandy Huffaker/Getty Images)

The first version of the spending package contained a tax perk for “local news journalism” designed to prop up local newspapers and broadcasters. These tax credits are refundable, meaning that if a news outlet is unprofitable due to a lack of local interest, taxpayers will cut it a check.

While this handout was removed in the second version of the bill, the latest version brings it back and even expands it. Now, not only can a media organization get a larger amount of tax credits, but eligibility was expanded to include companies of up to 1,500 employees.

As corporate welfare, this is bad enough to begin with. Worse, because the handout from taxpayers is being delivered through partisan legislation, it will encourage even more partisanship in the media.

This is adapted from “What’s in Third Version of Biden’s Big Government Spending Bill.” Check it out to learn more about what’s in the massive spending bill.