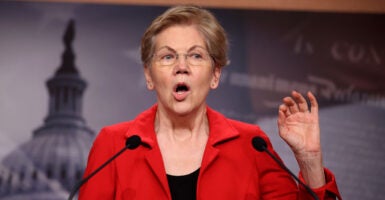 AnnaGrace Ziebarth is a student at Bethel University and a member of the Young Leaders Program at The Heritage Foundation.

In 1696, England instituted a window tax, which determined household taxes based on the number of windows in the home. The tax was intended to target wealthier households who would theoretically have more windows in their homes.

The tax was ineffective. To avoid paying the tax, new buildings included fewer windows and citizens bricked up their windows in existing buildings. The resulting lack of indoor ventilation even led to a stark increase in disease.

Whenever government directs a tax at a narrow set of items or people, it will soon find there is less to tax than there used to be. Just as the window tax reduced the number of windows in Europe, if the United States institutes new taxes on wealth or capital gains, it will reduce wealth.

Neither the Make Billionaires Pay Act nor the Ultra-Millionaire Tax Act did the difficult work of actually determining how assets would be valued, instead leaving that to the U.S. secretary of the treasury to figure out.

If a tax targets public and private stocks and bonds but doesn’t capture hard-to-value financial instruments, then that is where investors’ wealth will flow. All this reduction and reallocation of investments makes it harder for businesses to get the funding they need to grow and innovate.

Worse, to avoid paying taxes on U.S. assets, others may choose to move their businesses and assets (and their residency if necessary) overseas. This deprives American businesses of capital and also shrinks the rest of the U.S. tax base.

The other option for wealthy individuals is to simply spend money rather than investing it to avoid future wealth taxes. This incentive to consume rather than create diminishes wealth and business capital, stymying innovation. Similarly, others may draw money out of their businesses in order to pay the wealth tax, thereby decreasing wages and workers, adding to unemployment.

In a recent Twitter exchange with Tesla CEO Elon Musk, Sanders said, “We must demand that the extremely wealthy pay their fair share.”

Musk replied, “Want me to sell more stock, Bernie? Just say the word…” This wasn’t just an idle threat. Most of Musk’s wealth is the value of his companies. There is no pile of cash for Sanders to take. This tax would fall squarely on those companies and their value added to society through worker pay and the production of useful products.

Punitive taxes aimed at soaking the rich would simply push Musk to take money out of Tesla to cover the taxes he owed. That would mean less money for employee wages or investments in new equipment and technologies.

The same is true of other billionaires, even if they are less vocal about it. If U.S. policymakers choose to tax the wealthy, their wealth will be transferred to the government and out of the businesses that rely on it. Workers will ultimately pay through lower wages.

Taxing the wealth of the millionaires and billionaires may seem like a good idea, but it has serious unintended consequences. A progressive wealth tax will destroy the incentive to take risks and innovate.

If we want to continue to be a society that innovates—and that benefits from the good jobs that come with that—policymakers must push back against attempts to punish success and investments in the future.