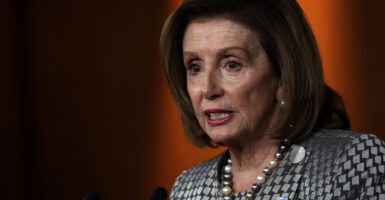 It would take 396 hours to read and understand what is in the omnibus. Unfortunately, Speaker Nancy Pelosi, pictured in the Capitol on March 3, is reportedly only giving members of Congress, their staff, and the public less than 12 hours before the vote is scheduled. (Photo: Alex Wong/Getty Images)

Facing yet another artificial, self-imposed government funding deadline, congressional leaders released a $1.5 trillion omnibus spending bill with the intent of jamming it through Congress and into law in just a few days with as little transparent and public debate as possible.

The 2,700-page omnibus spending bill is presented as a false choice: Either support this massive, expensive package and everything in it or suffer the political consequences of a partial government shutdown.

Through one manufactured crisis after another, the cycle of omnibus spending deals is one way that congressional leadership exerts its dominance over the legislative process at the expense of members who represent the majority of the American people. This is just another way in which the federal government is not held accountable to the American public.

Of course, this is not the only option available to lawmakers. There is no need to rush through a 2,700-page omnibus with little public review or debate.

Congress has already enacted three continuing resolutions this fiscal year, with at least one more expected. And it could, of course, consider legislative priorities that have bipartisan support, such as supporting our national defense, in an open and transparent way.

Here are eight ways the massive omnibus spending bill would be a mistake:

According to the House Appropriations Committee, the omnibus spending bill provides more than $1.5 trillion in federal spending for discretionary programs.

This represents an $88 billion increase over the current base spending levels.

Adding even higher levels of deficit-financed government spending will only add to inflationary pressures that are hurting American families.

Congressional leaders are trotting out their favorite talking point to sell the omnibus, touting the “parity” achieved by trading $42 billion increases in defense spending for $46 billion higher nondefense spending. It’s past time to retire this trope, not only because it ignores the vast majority of the out-of-control nondefense spending in the budget, but also because there simply is no parity in the importance of vital defense funding and the mostly wasteful, corrupt, and unconstitutional nondefense spending.

The Heritage Foundation’s Budget Blueprint shows that it is possible to make important investments in the Army, Navy, and Air Force to increase fiscal year 2022 defense spending to $765 billion while cutting excessive and harmful nondefense spending down to $625 billion for fiscal year 2022. (The Daily Signal is the news outlet of The Heritage Foundation.)

The omnibus spending bill would perpetuate and accelerate harmful government policies related to COVID-19, even though the data shows it’s time for America to return to normal.

Unfortunately, the omnibus fails to meet both of these conditions.

Furthermore, the spending bill includes another $15.6 billion in “emergency” supplemental appropriations requested by the Biden administration for COVID-19. [Editor’s note: Since this article was published, the emergency COVID-19 spending was removed from the bill.]

This spending would come on top of the nearly $6 trillion already provided by Congress over the last two years and despite the fact that the Committee for a Responsible Federal Budget’s COVID Money Tracker shows that about $800 billion has yet to be spent. This discrepancy is why 35 senators, led by Sen. Mitt Romney, R-Utah, requested additional transparency from the Biden administration about how previously provided funds have been used and how much remains unspent.

The omnibus spending bill even doubles down on giving more money and power to the same government agencies that made many mistakes over the last two years: providing $8.45 billion for the Centers for Disease Control and Prevention, $612 million for the Occupational Safety and Health Administration, and nearly $45 billion for the National Institutes of Health, an increase of more than $2 billion.

3. Ukraine as a Political Pawn

Russia’s reinvasion of Ukraine has led to calls from lawmakers to provide additional assistance to the people of Ukraine and our allies in Europe, on top of the “more than $5.6 billion in total assistance” provided to Ukraine since 2014.

Unfortunately, this crisis is being used as leverage to pass the omnibus spending bill, by tacking $13.6 billion in Ukraine aid to the rest of the unrelated nondefense spending increases and other controversial provisions.

These earmarks, airdropped into the final omnibus with little transparency, have not been thoroughly vetted.

Earmarks have a history of culture of wasteful spending and corruption, with several former members of Congress having been convicted of crimes related to earmarking.

Despite the attempted spin from some proponents of earmarking, spending carve-outs for local parochial projects that have nothing to do with carrying out the federal government’s limited enumerated powers are most decidedly not a valid tool for Congress’ Article I “power of the purse.”

A decade after conservatives won a major victory by banning earmarks, this omnibus spending bill is instead a win for the swamp of Washington, D.C.

Even if the Hyde Amendment is ultimately protected in a spending bill, an omnibus would still send taxpayer funds to Planned Parenthood. Because the Biden administration has overturned former President Donald Trump’s Protect Life Rule, the Title X program will once again direct taxpayer subsidies to abortion providers. Title X would receive $286 million in the omnibus.

One of the most controversial aspects of Biden’s agenda has been his effort to add 87,000 Internal Revenue Service agents and require financial institutions to report on the accounts of ordinary Americans to the scandal-ridden agency.

The omnibus spending bill would provide $12.59 billion for the IRS, a $675 million increase in annual funding.

7. Doubles Down on Green Energy Subsidies

Despite skyrocketing gas prices around the country, the omnibus spending bill doubles down on a radical green energy agenda.

Funding for Energy Efficiency and Renewable Energy subsidies are described by Sen. Patrick Leahy, D-Vt., as “a historic level of funding” at $3.2 billion, a 12% increase.

Clocking in at 2,741 pages of legislative text and 2,413 pages of explanatory materials, this omnibus spending bill is massive.

An above-average college student can read about 13 pages of technical material an hour, meaning it would take 396 hours to read and understand what is in the omnibus. Unfortunately, House Speaker Nancy Pelosi is reportedly only giving members of Congress, their staff, and the public less than 12 hours before the vote is scheduled so that the House Democrat Caucus can attend their party retreat.

No member of Congress voting on this legislation fully comprehends the legislation before them. That should worry all of us.

Instead of ramming this massive omnibus spending bill into law and finding out everything else that is in it later, lawmakers should reject higher nondefense spending, support our national defense, protect life, end harmful COVID-19 policies, and reject earmarks.