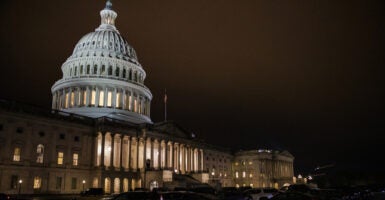 In congressional budget negotiations during the last decade, a favorite talking point used by legislators on both sides of the aisle has been achieving “parity,” which means increasing funding for defense and nondefense programs by the same amount.

With the continuing resolution providing appropriations through Feb. 18, some of Congress’ big spenders are advocating a massive omnibus spending bill.

Senate Minority Leader Mitch McConnell, R-Ky., told reporters that an omnibus bill could be possible if lawmakers agreed to “basic traditional riders, no poison pills and parity for defense and nondefense” for a appropriations spending bill.

Advocating to increase nondefense spending by the same amount as defense makes no sense.

According to data from the Office of Management and Budget, annual defense outlays increased $93.5 billion from 2018 to 2020, while nondefense outlays jumped an astonishing $2.3 trillion.

With most nondefense programs being autopilot mandatory spending, it is misguided to treat defense and nondefense the same when only discussing appropriations bills.

More importantly, there simply is no parity in the importance of defense and nondefense spending. The purpose of budgeting is identifying priorities and trade-offs.

National security is one of the core constitutional duties of government.

In contrast, many programs, projects, and activities supported by nondefense appropriations have nothing to do with carrying out the proper roles of the federal government.

Even worse, many policies congressional liberals prioritize including in an omnibus appropriations bill are extreme and harmful, such as:

Even if the Hyde Amendment is ultimately protected in a spending bill, an omnibus would still send taxpayer funds to Planned Parenthood. Because the Biden administration has overturned former President Donald Trump’s Protect Life Rule, the Title X program will once again direct taxpayer subsidies to abortion providers.

The U.S. Supreme Court has enjoined Biden’s attempt to impose an illegal COVID-19 vaccine mandate on an estimated 84 million Americans through the Occupational Safety and Health Administration. Congressional liberals are still demanding more taxpayer funding for OSHA that would be used to enforce onerous regulations on employers.

The House’s labor, health and human services, and education appropriations bill includes a $100 million increase for OSHA, even higher than Biden’s budget. The Senate bill would add 200 additional staff for OSHA’s enforcement program.

An omnibus would funnel even more taxpayer funding to empower Dr. Anthony Fauci and the massive agency he has led as director since 1984. The House bill would provide $6.6 billion for the National Institute of Allergy and Infectious Diseases, an increase of $488 million more than the current level, and even $312 million more than what the Biden administration asked for.

One of the most controversial aspect’s of Biden’s agenda has been his effort to add 87,000 Internal Revenue Service agents and requiring financial institutions to report on the accounts of ordinary Americans to the scandal-ridden agency.

An omnibus spending bill would advance the Biden agenda. Both the House and Senate financial services and general government appropriations and bills propose $13.6 billion for the IRS, a $1.7 billion spending hike.

An omnibus spending bill would be a vehicle for thousands of earmarks, funneling billions of taxpayer dollars to special interests. Earmarks only encourage wasteful spending and corruption, and are not a tool for properly exercising Congress’ Article I “power of the purse.”

These are just a handful of examples of the countless controversial policies embedded in the thousands of pages of spending bills put forward by congressional liberals.

Especially when considering reckless nondefense policies such as these, it is a mistake for policymakers to advocate funding parity between wasteful and harmful nondefense spending and important resources for national defense.

Instead of this radical agenda, Congress should reject higher nondefense spending, support our national defense, protect life, keep out damaging and divisive provisions, and reject earmarks.

Unless all of these reasonable conditions are met, lawmakers should not agree to full year appropriations.