Biden Budget Would Scrap Decades of Consensus on Not Funding Abortion 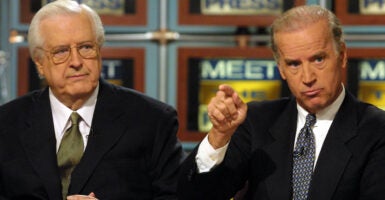 President Joe Biden has called for the elimination of the Hyde Amendment, named for its sponsor, then-Rep. Henry Hyde, R-Ill. Since 1976, the measure has barred federal funding of most abortions, and Biden supported it during his six terms in the Senate. Pictured: Hyde (left) and then-Sen. Joe Biden, D-Del., appear together as guests Sept. 30, 2001, on NBC's ''Meet the Press.'' (Photo: Alex Wong/ Getty Images)

President Joe Biden released his budget proposal on May 28 as Americans headed into the long Memorial Day weekend.

The “unreasonable and irresponsible” measure, as my Heritage Foundation colleague Matthew Dickerson described it, calls for dizzying amounts of spending across the federal government, paid for by American taxpayers. (The Daily Signal is the news outlet of The Heritage Foundation.)

In a highly controversial and divisive move, for the first time in decades, the presidential budget calls for direct taxpayer funding for elective abortions by eliminating the Hyde Amendment. Named for its sponsor, then-Rep. Henry Hyde, R-Ill., the Hyde Amendment is a pro-life “policy rider” that has been incorporated into federal spending measures on a bipartisan basis since 1976.

The original Hyde Amendment applied to Medicaid abortions and contained an exception if a woman’s life was in danger. In subsequent years, Hyde language has been revised to include exceptions for rape and incest and has been expanded to apply to additional funding streams, such as TRICARE, the Federal Employees Health Benefits Program, the Peace Corps, and more.

The Hyde Amendment has saved an estimated 2.4 million lives since its inception.

For the vast majority of his six terms in the Senate, Biden was in favor of the Hyde Amendment and repeatedly voted for government spending measures that incorporated the policy.

In a 1994 letter to a constituent, then-Sen. Joe Biden wrote, “[T]hose of us who are opposed to abortion should not be compelled to pay for them,” adding that “the government should not tell those with strong convictions against abortion, such as you and I, that we must pay for them.”

While campaigning during the 2020 presidential election, Biden notably flip-flopped on the Hyde Amendment and walked back his decades-old stance opposing taxpayer-funded abortions.

In addition to eliminating the Hyde Amendment from the spending proposal, the Biden budget proposes to eliminate other pro-life riders, including the Hyde counterpart for District of Columbia funding known as the Dornan Amendment.

The last time Congress failed to incorporate the Dornan Amendment, from 2009-2011, taxpayers funded 300 abortions through the District’s Medicaid program. The Biden budget would also strike the Aderholt Amendment, which prohibits the Food and Drug Administration from entertaining research proposals regarding genetic manipulation of human embryos.

The Biden budget calls for a massive increase in funding for the federal Title X family planning program, which already received a funding boost in this spring’s COVID-19 “relief” bill.

Biden’s call for more funding for Title X comes amid his plan to strip the program of important pro-life protections implemented during the Trump administration. Without those protections, abortion providers, such as Planned Parenthood, would be free to commingle their federally subsidized family planning activities with their abortion activities—in a clear violation of the legislative intent of the Title X statute.

The Biden budget retains the Helms Amendment, which prohibits foreign assistance funding from directly paying for abortions abroad. In 1973, the language was incorporated as an amendment to the Foreign Assistance Act of 1961.

In addition to being permanent law via the Foreign Assistance Act, the Helms Amendment—named for then-Sen. Jesse Helms, R-N.C.—is also incorporated into annual State-Foreign Operations appropriations bills. However, other provisions in the budget proposal undermine Helms’ protections with respect to foreign aid dollars.

Among Biden’s first acts as president was an executive order rescinding the Protecting Life in Global Health Assistance policy (the expanded Mexico City policy implemented by President Donald Trump). Under that policy, which has been in effect during every Republican presidential administration since Ronald Reagan’s, U.S. dollars are not to subsidize international organizations that perform and promote abortions overseas.

In the same order, Biden announced that he was reversing the Trump administration’s decision to withhold funding from the United Nations Population Fund, a stance Trump took due to the U.N. agency’s complicity in the Chinese government’s coercive population control policies, which include forced abortions and sterilizations.

Against the backdrop of Biden’s decision to eliminate important pro-life protections, funding increases in foreign aid dollars and for the U.N. Population Fund are concerning. Even if tax dollars aren’t directly paying for elective abortions, U.S. tax dollars will nonetheless be entangled with abortion activity abroad.

The Biden budget also proposes to rename the Women’s Global Development and Prosperity Fund as the Gender Equity and Equality Action Fund.

The fund is among the innovative programming that stemmed from the Women’s Global Development and Prosperity Initiative, a project spearheaded by Ivanka Trump during the previous administration that focuses on workforce development, entrepreneurship, and legal reform to empower millions of women across the world.

The renaming of the Women’s Global Development and Prosperity Initiative fund further reinforces the Biden administration’s plans to embrace radical gender ideology that rejects the reality of biological sex.

As previously explained by another of my Heritage Foundation colleagues, Grace Melton, “[W]e should not pursue a goal of gender equality that would seek to erase the differences between men and women.”

The Biden administration has repeatedly embraced the notion that “sex” should be reinterpreted to include gender identity; that is, an individual’s self-perception as male or female (or both, neither, or somewhere on a spectrum). This ever-evolving new orthodoxy threatens to undermine women’s progress in a host of different areas, including economics and politics.

Rebranding the Women’s Global Development and Prosperity Initiative fund to use the term “Gender Equity and Equality” is not a mere stylistic choice. It’s an intentional and deliberate change that—when viewed in the larger context of the Biden administration’s rejection of policy grounded in the understanding of binary biological sex in favor of subjective gender identity—signals that the initiative’s programming will be added to the list of policies subject to a radical and ever-evolving new sexual orthodoxy.

While Helms’ and other pro-life riders are retained for foreign aid funding, other actions taken by the Biden administration to weaken pro-life protections undermine the spirit of those important policies.

The majority of Americans across the political spectrum do not support taxpayer dollars funding abortions at home or abroad. Now that Biden’s budget has outlined his spending priorities, the ball is in Congress’ court to begin crafting appropriations bills.

Congress should reject Biden’s plans for removing important pro-life protections. All current pro-life riders must be retained and applied to all funding streams in federal spending bills for the upcoming fiscal year.