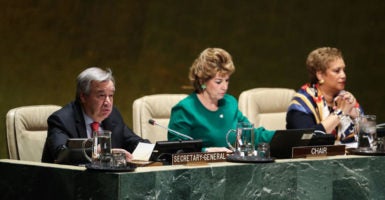 Secretary-General of the United Nations Antonio Guterres speaks during the U.N.'s Commission on the Status of Women, March 11, 2019. (Photo: Anadolu Agency/Getty Images)

When thousands of delegates and activists from around the world gathered recently in New York for the United Nations’ 63rd Commission on the Status of Women, the ostensible purpose of the 12-day gathering was to discuss the priority theme of access to social protection systems and to public services and sustainable infrastructure for gender equality, and the empowerment of women and girls.

Although too often these women’s conferences fall into the trap of defining women and women’s issues solely in terms of reproduction (obviously, an important component of womanhood, though not the only one), a newer danger to addressing women’s genuine needs was on full display at this conference.

Nowadays, the term gender identity is used to describe an individual’s self-perception as male, female, both, neither, or something along a spectrum.

The word “gender” in international legal documents has historically been understood to mean biological sex (male or female), and thus laws and policies that are implemented to achieve gender equality are intended specifically to help women and girls.

However, policies that treat people based upon their gender identity undermine decades of efforts to remedy historical and societal injustices that disproportionally affect women and girls by benefiting any male who “self-identifies” as a woman.

The Heritage Foundation, together with the Hands Across the Aisle Women’s Coalition, recently hosted an event, “Equal or Erased?: The Rights of Women and Girls in the Age of Gender Identity.”

The panel featured a diverse panel of speakers who explained how gender-identity ideology harms women and girls.

Each of the panelists—Dr. Monique Robles, Natasha Chart, Kaeley Triller, and Nuriddeen Knight—generally disagree with each other on many issues on political or religious grounds, but were united in their conviction that gender identity ideology, and the policies it demands, pose real threats to women and girls.

“In the U.S., doctors are giving 13-year-old girls mastectomies, throwing 14-year-old girls into menopause, and surgically castrating 16-year-old boys,” said Chart, board chairwoman of the Women’s Liberation Front and writer at Feminist Current. “So, some of us will still say that gender identity and self-identification are a form of hateful discrimination against women, and a threat to children, and a silencing of our complaints about sexual harassment.”

The panelists’ statements in defense of biological women provoked strong reactions from transgender activists, many of whom strenuously oppose the idea that women’s rights and private spaces be exclusive to women.

Those activists dominated the question-and-answer portion of the event with a variety of personal attacks and emotional statements barely disguised as questions, and some walked out of the room before even waiting to hear the panelists respond.

Pushback on this assertion—that a conference on women ought to be able to focus on the needs and challenges of actual, biological women—was even more heated in the Twittersphere.

For example, in response to a similar event that the Holy See co-sponsored with Heritage, the Women’s March Global tweeted under the hashtag #BanTheBinary and asserted that “Trans Women Are Women. This is not up for debate,” lamenting “trans exclusionary discourse.”

That’s part of a growing trend at the United Nations. LGBT activists and their liberal allies in the international human rights community, both nongovernmental organizations and member states, have succeeded in persuading a number of U.N. entities to reinterpret “sex” in foundational treaties such as the International Covenant on Civil and Political Rights to include “sexual orientation.”

Similarly, the committee that monitors implementation of, and compliance with, the Convention on the Elimination of all Forms of Discrimination Against Women treaty has issued a number of general recommendations incorporating gender identity into its guidance on issues, such as women’s access to justice, education, combating gender-based violence, and even climate change.

Additionally, transgender activists recently unveiled an updated supplement to the controversial Yogyakarta Principles, the “YP plus 10,” to cover “sexual orientation and gender identity and the recognition of the distinct and intersectional grounds of gender expression and sex characteristics.”

“YP plus 10” recommendations include allowing individuals to legally register according to gender identity without use of birth certificates or other documents and to allow name changes without taking into account psycho-medical diagnoses or a person’s criminal record.

As feminists around the world have warned, such a policy would allow male sex offenders to erase their criminal pasts from the public record by renaming themselves as women.

The YP plus 10 also includes a demand to allow male athletes to self-identify and compete as women. Far from being an obscure document, several U.N. special rapporteurs and independent experts either drafted or signed the Yogyakarta Principles and are well-positioned to incorporate them into U.N. documents.

Individuals who identity as transgender—or anything else—must be treated with dignity and respect, and are entitled to the same human rights and protections as anyone else. However, these human rights and legal protections—such as the rights to life, expression, and assembly, and freedom from torture and inhumane treatment—apply to all human beings by virtue of our humanity, not because of membership in any particular group.

Furthermore, there’s strong and growing resistance in the highest ranks of U.N. leadership to hearing the voices of member states that oppose the progressive redefinition of terms such as “family,” “gender,” “health,” “life,” and human rights.

Take, for example, the U.N.’s Free and Equal Campaign, a well-funded initiative with the weight of the Office of the United Nations High Commissioner for Human Rights behind it to promote controversial issues, such as same-sex marriage, the criminalization of “hate speech,” and the affirmation of LGBT lifestyles.

Those policies are anathema to many U.N. member states, particularly in the developing world, and are prime examples of the sort of ideological colonization that ruffles feathers abroad.

The U.S. statement at the conclusion of the Commission on the Status of Women rightly emphasized the American priority of meeting the real needs of women, despite efforts by radicals to promote abortion or the transgender agenda.

When Western countries and U.N. bureaucrats assert special privileges for particular favored identity groups through new readings of treaties, they undermine the universality of human rights and the legitimacy of the human rights movement.

The U.S. must insist that the U.N. bureaucracy and various other entities stay within their mandates so as to safeguard fundamental rights for all men, women, and children.