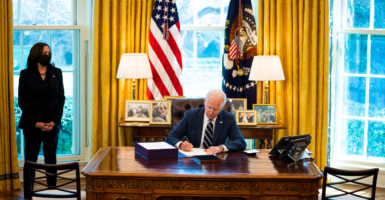 President Joe Biden signs the American Rescue Plan as Vice President Kamala Harris looks on in the Oval Office of the White House on March 11, 2021. Though regularly billed as “the COVID-19 relief bill,” the legislation is not focused on reducing the spread of the disease. (Photo: Doug Mills-Pool/Getty Images)

Though regularly billed as “the COVID-19 relief bill,” Democrats’ legislation is not focused on reducing the spread of the disease. Instead, it is stuffed with a wish list of progressive policies that have nothing to do with the pandemic.

In fact, less than 10% of the bill’s spending will be dedicated to public health. The vast majority will go to special interest payoffs and other wasteful spending that will do little to reduce the spread of COVID-19 or help the economy recover.

For example, nearly $90 billion is earmarked for a taxpayer-funded bailout of union pension plans that were massively underfunded long before COVID-19. This union bailout gets about twice as much funding as COVID-19 testing and contact tracing.

The bill would provide $126 billion for K-12 schools around the country. But the nonpartisan Congressional Budget Office says that only $6.2 billion of that—just 5%—would actually be spent by October.

More of this funding will be spent in 2026 than in 2021. How is that supposed to help reopen our schools?

The bill will send another $350 billion to state and local governments, on top of the hundreds of billions already provided. This spending is completely unwarranted, as last year’s coronavirus relief measures have already given states windfall funding well in excess of their projected revenue shortfalls.

Worse, this round of bailouts will reward those states that enacted especially draconian lockdowns that wrecked their economies, closing businesses and pushing workers onto unemployment.

One of the most expensive provisions in the bill provides a third round of “stimulus” checks to most Americans. Individuals earning up to $75,000 and couples earning $150,000 are eligible for $1,400 checks.

Sending checks to people who have been able to continue working and are even earning up to two-and-half times the median household income is not targeted aid.

Astonishingly, the package could even open the door to taxpayer-funded abortions.

In one bit of good news, the misguided proposal to increase the minimum wage to $15 per hour, which would have killed 1.4 million jobs, was thankfully dropped from the bill. The fact that this terrible idea was even included in a “COVID-19 stimulus” bill shows just how out of touch the “stimulus” bill is.

According to the Committee for a Responsible Budget’s COVID Money Tracker, of the $4.1 trillion in federal “coronavirus response funding” previously signed into law, about $1 trillion still remains unspent. Adding another $1.9 trillion to the national debt is a bad idea.

Even Larry Summers, chairman of President Barack Obama’s National Economic Council, has expressed fear that this new package is so costly, it could backfire, hurting the economy.

One year ago, America entered a sharp economic downturn as state governments began closing down normal business operations. This caused the unemployment rate to spike to 14.8% last April. Now, however, the economy is showing welcome improvement.

With the pace of vaccine distribution accelerating, safe reopenings and job gains should hopefully continue over the coming months.

While the health and economic trends have been positive, too many people are still out of work. Instead of wasting trillions of dollars on things that have nothing to do with COVID-19, the correct response to this problem should be targeted and temporary policies that are focused on reducing the spread of the virus.

For just a fraction of the bill’s $1.9 trillion price tag, we could deploy rapid self-administered COVID-19 testing around the country. This would allow those who have not yet been vaccinated to be regularly equipped with knowledge about their infection status and to make informed decisions about safely resuming work and other activities in a more normal way.

Instead of this massive and partisan legislative package, lawmakers should work together on a strategy that we know would bring the spread of the disease under control and allow the economy to continue improving.

This commentary originally was published by National Interest.