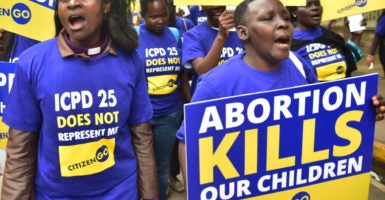 The Nairobi Summit demonstrated the deep pockets and far-reaching goals of the dangerous alliance between the abortion industry and the international development complex. Pictured: Kenya's pro-family activists and religious leaders demonstrate as they deliver over 68,000 signatures to the president of Kenya, Uhuru Kenyatta, at his office, to remove support for the upcoming International Conference on Population and Development, in Nairobi on Nov. 11, 2019. (Photo: Simon Maina/AFP/Getty Images)

The annual two-week meeting of the U.N. Commission on the Status of Women was supposed to kick off this week, flooding Turtle Bay in Manhattan with feminists and advocates of every stripe.

The event draws delegates from around the world and thousands of representatives from nongovernmental organizations to New York each March to discuss issues that affect women and girls.

The threat of COVID-19, however, and the recommendation of the U.N. secretary-general caused the commission to meet for a scaled-down, one-day meeting Monday instead, disappointing many.

This year’s commission meeting was set to mark the 25th anniversary of the landmark Fourth World Conference on Women and resulting Beijing Declaration and Platform for Action, held in Beijing in 1995.

Certainly no one was more disappointed by the change of plans than the radical feminists and abortion advocates who were eager to seize the opportunity of this year’s meeting to further their efforts to make so-called “safe abortion” universally acceptable and to entrench the controversial notions of “sexual and reproductive health and rights” and “comprehensive sexuality education” into the ever-growing panoply of progressive human rights.

But the Commission on the Status of Women was by no means the only thing on their agenda this year.

U.N. Women has launched a campaign called “Generation Equality” to guide its actions through this anniversary year and is organizing Generation Equality forums this summer in Mexico City and Paris ahead of the high-level meeting of the U.N. General Assembly in September, which likely will pass a resolution to mark Beijing+25.

The Nairobi Summit demonstrated the deep pockets and far-reaching goals of the dangerous alliance between the abortion industry and the international development complex that conditions foreign aid and development assistance on population control and abortion policies, raising pledges of more than $9 billion.

Certainly, gender inequality still exists throughout the world. But to achieve greater equality for women and girls, we must be guided by a proper understanding of both “gender” and “equality.”

Progressives at home and abroad, and even within U.N. Women, the organization within the U.N. system ostensibly devoted to women and girls, now routinely endeavor to redefine gender to include “gender identity” and countless new gender categories. But gender has historically referred to male and female, and must continue to do so, primarily to protect women and girls.

Equality between the sexes must take into account the reality that men and women are different. Gender equality must mean that we are equal in dignity, equal in opportunity, and equal before the law, and not that we are the same.

For the good of women and girls worldwide, we should not pursue a goal of gender equality that would seek to erase the differences between men and women.

Yes, as Hillary Clinton famously said, “Women’s rights are human rights,” because women, of course, are fully human. But women’s rights should never be defined to include abortion, because there is no right to kill an innocent human life, and abortion is a violation of the dignity of both mother and baby.

Pro-life advocates from around the world made sure to avoid that mistake 25 years ago, when world leaders convened in Cairo for the International Conference on Population and Development, and then in Beijing, to negotiate and adopt the Beijing Declaration and Platform for Action.

As there was in 1995, there is still much upon which we should all be able to agree: Women and girls around the world still need improved access to education, justice, and legal rights. They need sound medical care, good nutrition, and clean water. Many still suffer violence, coercion, and discrimination.

Furthermore, more than 100 million girls have been killed in the womb as victims of sex-selective abortion. It’s hard to imagine a greater threat to girls worldwide.

The U.S. must continue to act as a leader internationally to improve the lives of women and girls, and simultaneously to protect and defend the unborn.

The Women’s Global Development and Prosperity Initiative and the U.S. Strategy on Women, Peace, and Security are two recent examples of measures the U.S. has taken that are targeted specifically at addressing women’s needs.

The U.S. is the largest donor of bilateral reproductive health and family-planning assistance, while taking increasingly strong measures to ensure that U.S. funding does not go to entities that promote or perform abortions, thanks to the Trump administration’s Protecting Life in Global Health Assistance policy and the long-standing Helms Amendment.

In international forums, the Trump administration has boldly and consistently insisted that there is no international right to abortion and is leading a coalition of countries to join in opposition to U.N. entities that have been stealthily trying to create one.