Chemical Abortion Is Next Pro-Life Battlefield 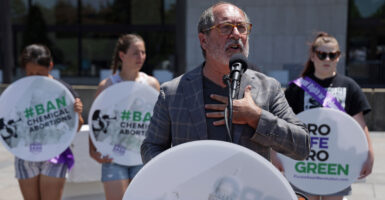 The Rev. Patrick Mahoney speaks at a "#BanChemicalAbortions" protest outside the Department of Health and Human Services on June 28 in Washington, D.C. (Photo: Alex Wong/Getty Images)

Isaac Bock is an intern with The Heritage Foundation and a member of its Young Leaders Program.

The Supreme Court’s June 24 decision in Dobbs v. Jackson Women’s Health Organization that “the Constitution does not confer a right to abortion” returned “the authority to regulate abortion … to the people and their elected representatives.”

That effort will be more complicated than when the court took that authority away 49 years ago in 1973.

According to the Guttmacher Institute, the three-decade trend of declining abortions in the United States is over, primarily because a majority of abortions are by chemicals, rather than surgery.

Killing a child in the womb no longer requires traveling to an abortion clinic, but can be accomplished without even leaving home with a two-drug combination approved by the Food and Drug Administration in 2000.

After the Dobbs decision, President Joe Biden vowed to keep this new trend going by protecting access to chemical abortion pills approved by the FDA.

Abortion advocates, of course, prefer the misleading term “medication abortion.” The Cambridge Dictionary, however, defines “medication” as “medicine … used to improve a particular condition or illness.” The “condition” in pregnancy is simply the existence of a living human being. Abortion destroys, rather than improves, that condition. When, as every drug commercial states, “used as directed,” abortion chemicals will kill and then expel an unborn child from the womb.

Such poisons are no more “medication” than the chemicals used in lethal injections in capital punishment.

Dr. Bernard Nathanson, founder of the National Abortion Rights Action League and later a pro-life advocate, once said that fewer women would have abortions if wombs had windows. So, here’s a peek into what happens during a chemical abortion.

The first pill, mifepristone, blocks progesterone, a natural hormone necessary for pregnancy. The lack of progesterone cuts off oxygen and nutrients, starving the child to death. Mifepristone results in the death of the child in 75% of pregnancies when it’s used.

Mifepristone is approved by the FDA for use up to week 10 of pregnancy. At that stage, a child’s heartbeat is detectable and his or her brain and lungs are forming. The child already has a clearly identifiable human shape.

If the first chemical does not kill the child, the second (misoprostol) will, stimulating uterine contractions and expelling the dead child.

Abortion chemicals, however, do not simply kill a child in the womb. Women die, and hundreds experience serious adverse drug experiences, every year. For that reason, the FDA instituted in 2007 a Risk Evaluation and Mitigation Strategy, which involves more restrictions than otherwise required for FDA-approved drugs.

This is the point where the politics of abortion make casualties of children and women. Abortion advocates once emphasized the relationship between a woman and her doctor. In Roe, the Supreme Court said that “the attending physician, in consultation with his patient, is free to determine, without regulation by the State, that, in his medical judgment, the patient’s pregnancy should be terminated.”

The shift from surgical to chemical abortion, however, will steadily remove doctors from the picture and leave women isolated.

Last December, for example, the FDA removed a critical Risk Evaluation and Mitigation Strategy  requirement that mifepristone had to be dispensed by a health care provider in person. The chemical may now be prescribed through telehealth appointments and shipped by mail without any face-to-face interaction between a woman and her doctor.

In response, 19 states have prohibited chemical abortion through telehealth, and some have introduced legislation that would ban the practice entirely. The power of states in this new area, however, is unclear. Attorney General Merrick Garland has said that states “may not ban mifepristone based on disagreement with the FDA’s expert judgment about its safety and efficacy.”

There will no doubt be litigation, however, over the broader effect of the FDA’s conclusion about safety and efficacy.

In Mississippi, for example, a manufacturer of generic mifepristone, GenBioPro, has already sued the state based on the claim that FDA regulations take precedence over the state’s ban on telehealth dispensing of the drug.

While issues like these complicate states’ effort to combat abortion drugs, Congress can and should step in. Congress creates executive branch agencies and gives them authority to implement federal legislation.

Abortion drugs not only kill babies in the womb, and can harm their mothers, but are isolating women and undermining the necessary relationship between patients and doctors.

In the 118th Congress, pro-life legislators must tackle this problem and limit the damage.