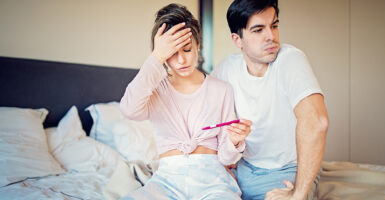 A new Care Net survey found that 38% of men whose partner had an abortion think they were the “most influential on her decision.” (Photo: Praetorian Photo/E+/Getty Images)

Men play a critical role in determining whether a woman chooses to have an abortion, according to a Care Net survey released last week.

“You can’t be serious about ending abortion unless you are serious about engaging men on the issue,” said Roland Warren, president and CEO of Care Net, a network of Christian crisis-pregnancy centers.

Care Net released the finding of a Feb. 25-March 26, 2021, survey of 1,000 American men whose spouse or partner had had an abortion. Findings show that roughly 3 out of every 4 men, or 74%, said their partner talked with them about getting the abortion before going through with it.

Forty-two percent of the men surveyed said they either “strongly urged” or “suggested” their partner have an abortion when they learned the woman was pregnant. An additional 31% say they did not give their partner any advice one way or the other.

Among the men surveyed who remained silent about the abortion decision, 63% said they thought it was “her choice” to make, and 61% said they were “ready to support her either way.” Nearly 20 out of every 100 men said they “didn’t feel they could say anything.”

The study found that 38% of men whose partner had an abortion think they were the “most influential on her decision.”

The data also reveals that “men play a key role in breaking the cycle of abortion and building strong families,” Warren said.

“The study confirms once again that, far from being solely a ‘woman’s issue,’ everyone has a role to play in building a culture of life,” Ryan Anderson, president of the Ethics and Public Policy Center, told The Daily Signal.

“Husbands and boyfriends are particularly important in the advice and support they offer to pregnant women, as are churches—and more needs to be done to encourage women to choose life,” said Anderson, co-author of the forthcoming book “Tearing Us Apart: How Abortion Harms Everything and Solves Nothing.”

The survey also examined the role the church does or doesn’t play in the decision to have an abortion.

Among the men surveyed, 47% said they attended church at least once a month at the time the abortion took place. Over half of the men surveyed said they thought that the “pastor’s teachings on forgiveness don’t seem to apply to terminated pregnancies/abortion.”

Scott McConnell, executive director of Lifeway Research, says there “is a message of help and forgiveness that the church should be sharing just as loudly.”

The survey’s release coincided with the 49th annual March for Life in Washington, D.C., on Jan. 21.

Tens of thousands of pro-life supporters gathered in the nation’s capital that day to stand for life and honor the 62 million babies aborted since Roe v. Wade, the 1973 Supreme Court ruling that made abortion legal across America.

Men “play a 50% part” in pregnancy, Christian musician Jordan St. Cyr told The Daily Signal at the March for Life. “I think it’s time for us men to bring 100% to the table,” he said, “as mothers have brought their 100%.”