Abortion Is About Our Core National Values 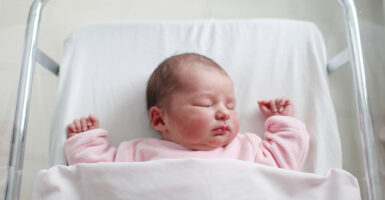 Surveys show the nation evenly split in attitudes toward abortion. Per the most recent poll from Gallup, 47% say abortion is morally acceptable and 46% say it is morally wrong. (Photo: Catherine Delahaye/Getty Images)

At issue is the law in Mississippi that bans abortion after 15 weeks of pregnancy.

A decision finding the Mississippi law constitutional will fundamentally change the abortion regime in our country, defined by Roe v. Wade since 1973.

Roe said the mother has a right to abort her child as long as that unborn child cannot survive—is viable—outside the womb. Generally accepted is 22 to 24 weeks as the time when viability occurs.

Mississippi’s abortion law says that the defining issue should not be viability but when the child first feels pain. Their claim is that this occurs at 15 weeks.

Surveys show the nation evenly split in attitudes toward abortion.

Per the most recent poll from Gallup, 47% say abortion is morally acceptable and 46% say it is morally wrong.

However, if we break down the averages into components, we see a deeply polarized nation.

About 64% of Democrats say abortion is morally acceptable, and 70% self-identify as pro-choice.

Only 26% of Republicans say abortion is morally acceptable, and 74% self-identify as “pro-life.”

Abortion is really a bellwether issue that shows the profound split in the nation regarding worldview.

Are we a nation of moral absolutes, that sees our culture grounded in traditional, biblically sourced standards of good and evil, right and wrong? Or are we a nation defined by secular humanism and moral relativism, where the center of the world is not God but man?

We have moved dramatically in the latter direction over the last half-century, and the results are out there to evaluate.

We are moving to becoming a childless nation.

U.S. fertility rates have dropped every year for the last six years and now are at a historic low of 1.64, well below the 2.1 necessary to keep the population at a steady state.

Are women “empowered” by being free of responsibility for bringing into the world the child in their womb?

Is using abortion as birth control necessary for women to achieve?

There is a certain irony among liberals, whom we can credit for today’s politically correct, woke culture.

We don’t want dehumanizing racial stereotypes, but the same people obsessed with racial categories are not at all bothered by a culture in which men and women use each other as sexual objects and women can be free to destroy a child that might result from a sexual encounter if its birth could lead to responsibilities that might disturb her career.

To get back to the Dobbs decision and Roe v. Wade and the issue of viability.

In my view, these games with language really point to the victory thus far of secular humanism.

The true issue is if life is sacred. If the answer is yes, it is sacred in and out of the womb.

If we conclude it is not, we are on the road to becoming a nation without children, where the only love is self-love and, I am sorry to say, without a future.

I say no thanks to this and hope the Supreme Court will make the right decision and allow Mississippians to protect sacred life.