The Silent Suffering of Fathers After Abortion 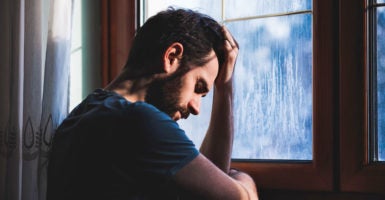 "These men still taste the bitterness and pain of their abortion. It’s always there," Victoria Robinson writes. (Photo: Marjan_Apostolovic/Getty Images)

Victoria Robinson is the director of external relations at Save the Storks. She is the author of “They Lied to Us,” a compilation of stories from women who had an abortion.

Thirty years ago, at the urging of my then-boyfriend, I had an abortion.

He convinced me we weren’t ready to have children, promised we’d get married one day and have children later, said we’d be together forever, and assured me that he loved me.

I believed every word.

So, on a Saturday morning, I drove myself to Planned Parenthood and my life was forever changed. As was our relationship. Nothing was the same between us after we made the decision to end the life of our child. Nothing. Within a year, we broke up.

My scenario is extremely common. Many couples involved in an abortion simply don’t make it. The act is just too traumatic to be reminded of by constantly being together.

After the abortion, I don’t think we ever looked at each other the same again. I’d catch myself watching him and wondering, “How could he say he loved me when he allowed me to go through that?” Like me, I would guess, he was wondering himself, “How could she actually go through with it?”

Confused, and with broken hearts, we said goodbye to our “happily ever after.”

Through the years, I’ve thought of him often—not with compassion or sympathy, but with hatred and disgust. As time went on, I found myself loathing the man I once loved and wanted to grow old with. I hated what he’d done to me, loathed him for what he’d made me do. I blamed him for years for what happened until I finally had to accept my part in ending the life of our baby.

In my mind, I imagined he was going on with his own happy, successful life, having forgotten all about me and the child we’d lost, and it made me angry.

I was convinced that post-abortive men weren’t suffering the same effects as the women they’d impregnated, and I completely detached myself from having empathy for these post-abortive fathers.

But I also hated the fact that I hated someone so much, and knew I had to do something about it. So I chose to volunteer at a local pregnancy resource center. I felt that if I could help keep other women from making the same mistake I’d made, my own sense of pain, guilt, and shame would subside.

After going through my own healing process, at the encouragement of family and friends, I decided to write a book, “They Lied to Us.” I not only shared my story in the book, but the stories of other women who’d chosen abortion and how it had forever changed them. Although I changed my own post-abortive father’s name in the book, I felt an obligation to tell him about it.

After 13 years, I picked up the phone and dialed his number.

He recognized my voice immediately. Then, something happened that will always be etched in my mind. He began to cry, then sob. I could barely understand his inaudible voice.

Finally, he calmed down and began telling me he’d waited and prayed for this call for over a decade. He said, “I’ve been wanting to tell you how sorry I am for what I made you do. Can you forgive me? Please, forgive me.”

He went on to say, “As a man, it was my job to protect you and our child. Our choice has haunted me ever since. I’ve been in therapy for years trying to deal with it. I wish we could go back and change it.”

In that moment, something changed within me.

The hatred I’d felt for so long was gone. What I felt now was true compassion, empathy, and sympathy for this man I’d grown to despise. Frankly, I was shocked. I had no idea that like me, he’d been traumatized by our decision to end the life of our child.

His healing was made complete when I said, “I forgive you.” And I meant it.

It didn’t end there.

I asked him to forgive me as well, because no one held a gun to my head when I walked in that abortion clinic and allowed my baby to be taken from me.

We talked a little while longer, then said goodbye. A 10-minute phone call changed us both. For me, it brought the healing that was missing in my heart. It also shifted my paradigm as to how I’d view the post-abortive father from that point on.

I’d had an epiphany. Men were hurting, too. Men were experiencing pain and trauma of a past abortion, yet no one was talking about it. Any time the issue is mentioned, the focus is on the women and babies. The men are forgotten.

But, we must recognize these aborted babies had fathers.

Throughout our culture, men have been made out to be tough, macho, insensitive, without emotion or feeling. If they care to be vulnerable, they’re labeled weak.

But the truth is, men are affected by abortion in some of the same ways as women. There are more than 55 million post-abortive men in this country, men who are suffering alone from the effects and trauma of an abortion.

We can no longer silence them. They’re not talking about it because they’ve never been given permission to do so. They’re afraid of how they’ll look, or maybe they’ve convinced themselves no other man feels this way. This is just another tragic ramification of abortion.

Throughout my speaking career, as I’ve traveled around the country sharing my own story, I’ve met hundreds of men at my events. They come to meet me at my book table, many confiding in me, a woman they’ve never met, because they know I’ll listen without judgement or condemnation. Again and again, I hear the same things.

“I’m haunted by the abortion.” “I have no one to talk to about it.” “No one understands.” “We’re in pain, too.” Walking away, they’ll whisper, “Please, don’t forget about us.”

In the moment of decision, abortion may be a quick, easy solution for a man. He can then remove himself from the situation and move on with his life. For one thing, his body isn’t affected in the same way as a woman’s, so it may be easier for him to forget. For some men, walking away and forgetting seems to work.

But for countless others, it does not.

These men still taste the bitterness and pain of their abortion. It’s always there. Without knowing it, this unspoken part of their past creeps up on them through the way they behave or treat others.

Men have told me they never understood why they were so angry, had trust issues, abused drugs or alcohol, or suffered from depression. Some of these men have carried these issues for years, some decades, until they come to understand these behaviors stemmed from their past abortion experience.

We must change the stigma of men when it comes to the abortion issue.