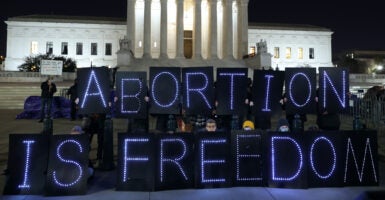 Pro-abortion activists demonstrate outside the U.S. Supreme Court on Nov. 30, the night before the court heard arguments in Dobbs v. Jackson Women's Health Organization, a case about a Mississippi law that bans most abortions after 15 weeks. But their assertion that "abortion is freedom" is predicated on the myth that abortion is a pregnant woman's only practical option. (Photo: Chip Somodevilla/ Getty Images)

Levy Pait is a graduate of The Heritage Foundation's Young Leaders Program.

With the Dobbs v. Jackson Women’s Health Organization case before the Supreme Court and the ongoing litigation over the Texas heartbeat law, the issue of abortion looms large in our national discourse.

Too often, pro-abortion actors make claims that are simply not true, and those claims are repeated without challenge in the media. Therefore, it’s vital that the American public be made aware of facts that challenge the pro-abortion narrative.

Here’s the truth you need to know about three core claims of abortion activists:

Myth 1: Abortions Are Safer Than Childbirth

Abortion activists claim that abortions are safer than childbirth. But that’s the exact inverse of reality—and for a number of reasons.

First, this framing of the debate denies the humanity of the unborn child from the outset. Because every fetus is a human possessing fundamental dignity, their health and safety must also be taken into consideration.

Second, besides the fact that abortions necessarily involve the killing of unborn children, abortion is not necessarily the safer option for women.

After getting an abortion, women have approximately an 80% higher risk of experiencing mental health issues, including suicidal tendencies and substance abuse.

According to Dr. Ingrid Skop, an obstetrician-gynecologist, potentially fatal complications from abortions include “vaginal or intra-abdominal hemorrhage … infection … incomplete removal of the remains of the aborted baby, damage to the cervix, uterus, or other pelvic or abdominal organs … anesthetic reactions or overdoses, amniotic fluid, septic, or thrombotic embolisms, cardiac, or cardiovascular events.”

Third, the assumption that abortion is the safer option for women ultimately rests on incomplete data.

Myth 2: Abortion Is a Woman’s Only Practical Option

Studies show that most abortions are chosen for reasons related to factors such as finances or personal relationships.

An overlapping 73% claimed they could not afford a child, and nearly 50% had relationship issues or did not want to become a single mother.

Even among third-trimester abortions, as reported by Dr. James Studnicki, “most late-term abortions are elective, done on healthy women with healthy fetuses.”

It’s clear from these numbers that medical emergencies do not motivate most abortions.

In contrast, the pro-life movement stresses providing the resources women need to give birth and raise their children.

Pregnancy resource centers help pregnant women and their families navigate challenges such as the pregnancy itself, financial management and needs, threats to job security, unsupportive partners and family members, and more.

According to one study, in 2019, pregnancy centers performed ultrasounds for 486,213 mothers-to-be free of charge and provided mothers and families with material resources such as diapers, baby clothes, and the like.

In total, they provided $266,764,916 worth of services, and 9 out of 10 people working at pregnancy resource centers do so on a voluntary basis.

Despite activists’ claims, abortion doesn’t solve any of those problems. By reducing “care” for women to the elimination of the unborn life, the mother is not helped.

The claim that most Americans support abortion is misleading when checked against data from a 2021 Knights of Columbus/Marist Poll.

Despite a slight majority (53%) of Americans identifying as “pro-choice,” 55% of pro-choice individuals are in favor of abortion restrictions.

According to the poll, 76% Americans support significant restrictions on abortion, with 70% of Americans in favor of restricting abortions after the first trimester—which would bring U.S. law in alignment with the rest of the world, including 47 out of 50 European countries.

Likewise, when asked if they support abortion based on a diagnosis of Down syndrome, 70% of participants opposed such an abortion. Additionally, 58% opposed taxpayer money going to abortions.

Ultimately, these numbers reflect a nation that wants to do more to protect unborn children and is not remotely aligned with the abortion lobby’s position of abortion on demand, for any reason, through all nine months of pregnancy.

Sadly, that hasn’t kept Democrats from calling for the elimination of the Hyde Amendment, which would clear the way for taxpayer-funded abortions.

The facts indicate that abortions are not safe for unborn children and carry significant risks for the mothers who receive them.

Most abortions are not done for cases of rape, incest, or to save the life of the mother. Lastly, most Americans do not support radically permissive abortion policies. In fact, most Americans support policies that further protect unborn children than what is currently permitted under Roe v. Wade, which allows for elective abortion through all nine months of pregnancy.

We are being presented with the greatest opportunity of our lifetime to turn the tide for life. We must tell the truth about abortion and not allow pro-abortion arguments to rule the day unopposed.