Restoring a Culture of Life: How the Administration Is Prioritizing Life and Conscience Rights 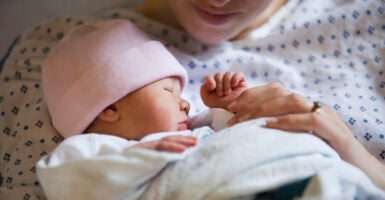 Among other actions, the Trump administration has issued guidance regarding enforcement of and increased transparency in Obamacare abortion requirements. (Photo: Tetra Images/Mike Kemp/Getty Images)

This article is an excerpt from the 2020 Mandate for Leadership: A Clear Vision for the Next Administration. It looks back at the policy decisions made by the Trump administration over the past four years. You can purchase your copy of Mandate 2020 here.

Since publication of the last Mandate, the Trump administration has taken significant, meaningful action to support the dignity of human life from conception to natural, dignified death.

For example, the president issued an executive order reinstating and expanding the life-affirming Mexico City Policy, now known as the Protecting Life in Global Health Assistance Policy, which ensures that American taxpayers do not fund international organizations that perform and promote abortion overseas.

Importantly, the policy does not reduce funding for global health assistance. Rather, it ensures that U.S. dollars are not entangled with the abortion industry and that American taxpayers do not subsidize nongovernmental organizations that do not respect innocent human life.

The Trump administration also invoked its authority under the Kemp-Kasten Amendment to withhold funding for the United Nations Population Fund because of its complicity in violating the rights of Chinese women and men by aiding the Chinese government’s coercive population control policies.

First enacted in 1985 and included in every foreign appropriations bill since then, the Kemp-Kasten Amendment authorizes the president to withhold federal funding from any organization that “supports or participates in the management of a program of coercive abortion or involuntary sterilization.”

The millions of dollars previously appropriated to the United Nations Population Fund are instead redirected to other maternal health programs.

The Trump administration issued two regulations to provide much-needed relief to those with religiously or morally-based objections to one of Obamacare’s most egregious assaults on rights of conscience and religious liberty: the Department of Health and Human Services mandate that requires nearly all insurance plans to cover abortion-inducing drugs and contraception.

The mandate is a burden on those who, because of their beliefs concerning the protection of unborn human life, are forced to violate their sincere moral or religious beliefs, pay steep fines, or forgo offering or obtaining health insurance. Federal judges in multiple states have issued injunctions blocking implementation of these rules, and the cases are pending appeal.

The current administration issued guidance regarding enforcement of and increased transparency in Obamacare abortion requirements. Obamacare prohibits insurers from using premium tax credits or cost-sharing reduction subsidies for most abortions.

It also requires that if a qualified health plan covers abortion outside the Hyde Amendment exemption and separate additional premiums are collected for such coverage, insurers must notify consumers of these facts.

The Government Accountability Office has found that even this “separate funding” accounting gimmick has been ignored, and the current administration’s guidance addresses this lack of enforcement. Insurance issuers must abide by the letter and spirit of the law and provide some semblance of transparency regarding abortion in qualified health plans.

Given the accusations of fraud and abuse in Medicaid programs by numerous abortion providers, states should be allowed to maintain the integrity of their programs and tailor them to reflect state priorities.

In rescinding the 2016 guidance, the current administration expressed concern that “the 2016 Letter raises legal issues under the Administrative Procedures Act and limited states’ flexibility with regard to establishing reasonable Medicaid provider qualification standards.”

Rescinding the 2016 guidance does not mean that the ability of states to disallow abortion providers from participating in their Medicaid programs is unlimited; states must still comply with statutory and regulatory requirements regarding qualification standards.

Rather, rescinding the 2016 guidance showed a commitment to rolling back Obama-era administrative policies that potentially overstep agency authority and put a thumb on the scale in favor of the abortion industry.

In addition to enacting policies that promote the cause of life, the current administration has taken significant action to protect rights of conscience, particularly in the context of health care.

For example, the administration issued final rules to strengthen the enforcement of federal conscience statutes and has established a Conscience and Religious Freedom Division within the Department of Health and Human Services’ Office for Civil Rights to implement and enforce protections for this fundamental right.

Dozens of statutes protecting rights of conscience appear throughout federal law. It has long been a bipartisan understanding in Congress that protecting rights of conscience allows for the expression of a diversity of values in health care while ensuring that individuals and entities are not compelled to participate in practices that violate their sincere moral, ethical, or religious convictions.

Recognizing that conscience protections ensure that Americans can work and live according to their moral and religious beliefs, the final rule will help to ensure that health care professionals and entities do not face coercion or discriminatory action if they decline to participate in certain activities because of moral or religious objections.

In Congress, given the political reality of a pro-abortion majority among members of the House of Representatives and a narrow pro-life majority in the Senate, success in advancing pro-life policy has been more limited.

In early 2017, for example, Congress used the Congressional Review Act to reverse President Barack Obama’s parting gift to Planned Parenthood by disapproving a final rule submitted by the secretary of health and human services in the waning weeks of the Obama administration.

The rule in question prohibited states from disqualifying Planned Parenthood and other abortion providers from family planning programs under Title X, the federal program that provides services to low-income individuals at reduced or no cost.

It was proposed in response to attempts at the state level to redirect funding—including Title X funding in some cases—from Planned Parenthood, particularly after the nation’s largest abortion provider was featured in a series of undercover videos released by the Center for Medical Progress in 2015.

As several pro-life groups stated in formal comments when the rule was proposed, the rule “runs contrary to the right of States in our federal system to optimize health care for women by prioritizing public funding to providers who offer primary and preventive care as well as contraception.”

Congress rightly agreed with this sentiment and used its authority under the Congressional Review Act to ensure that states remain free to prioritize the providers they deem best.