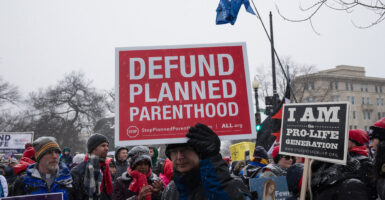 The Biden administration is seeking to roll back important provisions of the Trump administration’s 2019 “Protect Life” rule. Pictured: Tens of thousands of pro-life supporters march in Washington on Jan. 22, 2016, on the anniversary of the 1973 Supreme Court decision Roe v. Wade. (Photo: Albin Lohr-Jones/Pacific Press/LightRocket/ Getty Images)

The public comment period closed Monday for a rule proposed by the Biden administration that would roll back important provisions of the Trump administration’s 2019 “Protect Life” rule.

At issue in the debate is the federal Title X family planning program. The law that established the program—Title X of the Public Health Service Act (1970)—says that no funds appropriated “shall be used in programs where abortion is a method of family planning.”

The Trump administration’s Protect Life rule required that grantees maintain strict physical and financial separation between Title X activity and abortion-related activity. In other words, a grantee couldn’t conduct Title X activity in one room and perform abortion with non-Title X resources in a room down the hall.

The Protect Life rule also ensured that Title X regulations are consistent with federal conscience rights laws by not requiring grantees to refer for, or counsel women to get, abortions.

During the Trump administration, Planned Parenthood refused to comply with the terms of the rule and walked away from $60 million in Title X funds.

Now, the Biden administration has proposed a rule to reverse the Trump administration’s pro-life policies and allow Title X activity to be conducted alongside abortion activity without strict physical and financial separation.

The rule would require grantees to refer for abortions, despite sincere moral or religious objections, effectively banning otherwise qualified pro-life grantees from participating.

The Heritage Foundation has long articulated the importance of conscience rights and opposed taxpayer dollars being entangled with abortion activity.

In response to the Biden administration’s proposal to gut those important protections, Heritage submitted public comment in opposition to the rule.

An abridged and lightly edited version of that comment follows:

The Biden administration’s proposed regulation guts the 2019 requirements that Title X regulations comply with the clear, unambiguous language of the Title X statute: “None of the funds appropriated under this subchapter shall be used in programs where abortion is a method of family planning.”

The statute has remained unchanged for more than 50 years, and appropriations legislation that provides funding for the Title X program reiterates this requirement, most recently in the Consolidated Appropriations Act 2021, which stipulates that funds appropriated for Title X “shall not be expended on abortion.”

The 1970 conference report for the legislation establishing the Title X program explains that funds are only to be used “to support preventive family-planning services, population research, infertility services, and other related medical, informational, and educational activities.”

The conferees have adopted the language contained in section 1008, which prohibits the use of such funds for abortion, in order to make clear this intent.

The 2019 regulation, a “materially indistinguishable version” of a regulation upheld by the Supreme Court in Rust v. Sullivan (1991), recognized Congress’ clear intent. In its opinion, the Supreme Court was clear that “the legislative history demonstrates that Congress intended that Title X funds be kept separate and distinct from abortion-related activates.”

Congressional intent is clear: Abortion is not family planning, and Congress intended for there to be a clear separation between abortion and Title X activity. The 2019 regulation rightly ensured compliance with the Title X statute by requiring clear physical and financial separation of Title X activity and abortion activity.

The Biden administration’s proposed rule opens with an acknowledgement that Congress has, on multiple occasions, enacted statutes protecting conscience rights in the context of abortion. Such laws include the Weldon Amendment, which prohibits (among other things) discrimination on the basis that a health care entity does not refer for abortions.

However, the Biden administration’s proposed rule makes no such acknowledgement or mention of such civil rights in the proposed regulatory text, which states that projects must offer pregnant clients the opportunity to be provided with information about abortion.

The proposed rule is inconsistent with long-standing federal civil rights law protecting rights of conscience. While the Biden administration is entitled to take a position on abortion, it cannot force Title X projects to communicate a message that directly contradicts and undermines their beliefs (in addition to being against the plain text of the law).

If an otherwise qualified potential grantee decides that it cannot, in good conscience, agree to provide the information about abortion outlined in the regulation, and is precluded from applying for program funding, then the Department of Health and Human Services has deliberately limited the diversity of the pool of applicants that can be awarded grants.

Every day, thousands of Americans freely choose to seek health care at high-quality clinics that are not enmeshed with the abortion industry. The proposed rule would mean that those Americans would be unable to access Title X program activity at a site that aligns with their choices and personal values.

Title X of the Public Health Service Act is clear: Funds may not “be used in programs where abortion is a method of family planning.” The Biden administration’s justification for allowing commingling of Title X programs and physical and financial resources related to abortion is woefully deficient.

The Trump administration’s 2019 Protect Life rule rightly sought to uphold what the law requires with respect to good stewardship of taxpayer dollars and freedom of conscience by preventing the government from compelling speech.

The Biden administration should not infringe upon fundamental freedoms by revising these important policies.