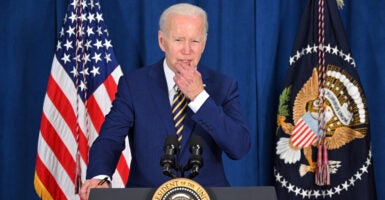 President Joe Biden—seen here speaking on June 3 in Rehoboth Beach, Delaware—called for tax increases as a way to reduce the deficit and thus curb inflation, when what he should have called for is a sharp cut in federal spending. (Photo: Mandel Ngan/AFP/Getty Images)

In a speech in Rehoboth Beach, Delaware, on June 3, President Joe Biden acknowledged that deficits contribute to inflation, when he stated, “Reducing the deficit is another way to ease inflation.”

Unfortunately, instead of a call to rein in spending, the president’s speech was a call for more taxes.

To tame the inflation dragon, however, fiscal policy must instead focus on reducing runaway spending.

If the president and Congress try to tax their way out of inflation—especially through taxes on businesses—they only risk more supply-side problems, like the shortages and price hikes now plaguing the economy.

Here are four takeaways from Biden’s speech the week before last and the plan to raise taxes laid out in the White House budget.

1) It Will Make Matters Worse for Consumers

The president claimed that his tax plan would only raise taxes on the wealthy and “big corporations.” However, his claim that the taxes apply only to big corporations is false.

The president’s budget would increase tax rates on corporations by a whopping one-third, regardless of the size of the business. Large and small corporations alike would face the tax hike.

Piling new taxes onto the cost of doing business in America is hardly a recipe for making goods and services more affordable for American consumers.

When America experienced a decadelong bout of high inflation and tepid economic growth in the 1970s and early 1980s, a combination of sound monetary policy, pro-growth tax reform, and deregulation put us back on track.

To the surprise of the establishment, inflation tumbled from 13.5% in 1980 to 10.4%, then 6.2%, and then 3.2% in 1983 as the Federal Reserve tightened the money supply and President Ronald Reagan deregulated the economy and passed his 1981 supply-oriented tax cuts.

By 1983, the economy had begun a historic boom, all while keeping inflation in check.

On the other hand, the only way a corporate tax hike can help tame inflation is by cratering the economy and sending real wages plummeting.

Any notion that Biden’s fiscal plans will help tame inflation crumble when you factor in his budget’s enormous increases in spending. Biden’s budget proposes 10-year outlays at least $7.5 trillion above the government’s 2021 baseline forecasts for the same period.

Biden distracted attention from his own proposed taxes by attacking a straw man. The White House continues to repeat the bogus claim that congressional Republicans are proposing to raise taxes on American families.

The White House budget would effectively increase individual taxes on almost 90% of American taxpayers by allowing the individual provisions of the 2017 Tax Cuts and Jobs Act to expire.

The 2017 tax reform was the signature achievement of the 115th Congress, the last time that Republicans held majorities in both houses of Congress and there was a GOP president in the White House.

If Congress follows Biden’s budget and allows the individual provisions of the Tax Cuts and Jobs Act to expire, a typical low- to middle-income family of four will face an annual federal income tax hike of about $1,300 starting in 2026.

Taking more of the money Americans earn is not a good solution for inflation.

3) It Calls for Corporate Welfare

The president also called on Congress to pass his green energy proposal; namely, the energy provisions in the so-called Build Back Better Act, which is stalled in the Senate.

However, Biden’s stated goal of eliminating carbon emissions from the electricity sector by 2035 won’t come cheap, and for that matter, stands little to no chance of happening at all.

Instead of reducing deficits and inflation, the plan includes $555 billion in spending and tax breaks targeted for green energy, climate initiatives, environmental activism, and the like. That includes $320 billion of tax subsidies for electric vehicles, solar energy, wind turbines, biofuels, and other alternate fuels.

What the president is proposing is simply crony capitalism.

The president said, “I met with nearly a dozen CEOs of America’s largest utility companies, such as Southern Company and American Electric Power. They told me that if we pass the investments, … they’ll immediately lower the average family’s energy costs by about $500 a year.”

In other words: Trust the nice businesses angling for more money from their friends in the government.

The truth is the American people would ultimately be left footing the bill for this corporate welfare, either with new taxes, deficit-fueled inflation, or both.

As the Biden administration is propping up green energy, it would simultaneously smack fossil fuel companies with $45 billion of new taxes, blatantly picking winners and losers in the economy.

Don’t expect this administration to prioritize policies that increase the supply of oil and lower gas prices. That’s not what it’s about. Look no further than Biden’s 2020 primary debate, in which he described his plans for the oil and gas industry, “No. 1, no more subsidies for fossil fuel industry. No more drilling on federal lands. No more drilling, including offshore. No ability for the oil industry to continue to drill. Period. Ends.”

Or, as Biden said in May, “When it comes to the gas prices, we’re going through an incredible transition that is taking place that, God willing, when it’s over we’ll be stronger, and the world will be stronger and less reliant on fossil fuels.”

4) It Would Fund Foreign Governments

In Biden’s speech, he also spoke in favor of a proposed global tax agreement, stating, “We put together a multination [tax] initiative that I’m hopeful will come into play at the [Group of Seven].”

That’s a reference to the Organization for Economic Cooperation and Development’s “Two-Pillar Solution” to address taxes and digital services in the global economy.

Neither of those pillars would help Americans with inflation, but they would subject American families to the harmful effects of more taxes.

“Pillar One” would change the rules of the game so that the profits of certain large multinational companies would be taxable in countries even if they have no physical presence there.

Martin Sullivan, the chief economist with Tax Analysts, estimated that 31 out of the 67 large companies around the world whose profits would be reassigned based on the international agreement are U.S.-based companies and that more than 60% of the taxable profits reassigned would be U.S. profits that would become taxable overseas.

The shifting of tax revenues away from the U.S. is by design, not by accident.

The hole in the federal budget left by the U.S. voluntarily handing over corporate tax revenue to other countries would leave the American people to fill in the gap with more taxes or facing higher deficits and higher inflation.

And unlike a tax cut, this transfer of revenue out of the U.S. Treasury won’t create a single American job or spur a single dollar of U.S. investment.

The other part of the global tax framework, “Pillar Two,” would require countries to adopt a global corporate tax rate of 15% or higher. Countries that fail to adopt the minimum tax would effectively give up a portion of their taxing rights of domestic companies to other countries.

Governments won’t use that $275 billion per year to put more products on shelves. In fact, by siphoning off those resources from the businesses that keep shelves stocked and from the workers that make the economy churn, bloated governments will only make the economy more susceptible to shortages and rising prices.

The bottom line is this: The latest pitch for more taxes has nothing to do with inflation. The left always wants more of your tax dollars, and it will never be satisfied that enough is enough.