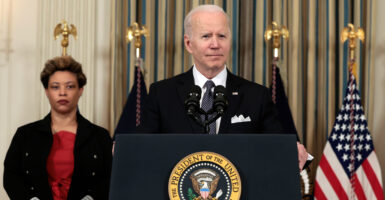 Unsurprisingly, the Biden budget is bloated with excessive spending, harmful taxes, more regulations, and control over Americans’ lives, along with damaging policy proposals.

The budget matters because the power to tax and spend is the key to everything the federal government does.

If we are going to save America from the politicians, bureaucrats, and cultural elites empowered by expansive government spending, it’s necessary to reverse the growth of the size, scope, and reach of the government.

Congress should reject Biden’s budget proposal and instead focus on solving the most important challenges facing the country, such as reversing government spending and inflation, promoting energy independence, empowering parents, and strengthening the rule of law and free enterprise so that the United States can outcompete any competitor, including Communist China.

There are five major problems with Biden’s budget:

American families are suffering under inflation levels not seen in four decades, hitting 7.9% last month. This inflation has been fueled by irresponsible government spending and monetary policies, coupled with harmful labor, energy, food, housing, and trade laws that have pushed prices higher.

On top of the spending spree Biden and his allies in Congress went on last year, Biden’s budget calls for $72.7 trillion in spending over the next decade—averaging more than $1.4 trillion in higher annual spending than even this year’s extravagant budget.

The Biden administration’s policies are already eating away at households’ budgets through massive inflation, and this budget would further squeeze them through reckless spending and tax hikes.

Despite a bipartisan rejection of the radical idea that taxpayers should ever fund abortion, it fails to include the Hyde Amendment. The Hyde Amendment has saved an estimated 2.4 million lives since 1976. Biden also proposed a 40% increase in Title X funding, dramatically expanding federal subsidies to entities that perform abortions.

Even with gas prices reaching more than $4 per gallon, the Biden budget doubles down on this administration’s dubious Green New Deal agenda that would jeopardize America’s energy diversity and choke our energy supply.

Sending billions of tax dollars to unproven energy sources politically preferred by liberal elites is cronyism. At a time when we are challenged with authoritarianism around the world, we should instead be promoting energy freedom here at home.

Biden proposes an unprecedented level of federal funding and control be bestowed on the education establishment, along with a huge increase in subsidies for college education, even though current subsidies are already inflating tuition prices through the roof.

Even though the core subject of a budget document is the nation’s finances, the Biden budget still pays fealty to left-wing social causes throughout.

On defense, the Biden administration is touting once again investments in research and development, while reducing our military capacity via retirements of ships and aircraft at a faster rate than replacements.

As the Russian invasion of Ukraine shows, the military needs to be able to deter—and if that fails, fight—tonight, not five to 10 years from now.

Further, instead of investing in military capabilities and capacity, the Biden administration chooses to request billions of dollars for initiatives that would be better suited in a Green New Deal than in the Department of Defense. When it comes to defense, it’s a budget that does not take the threat of China seriously and allows inflation to erode defense dollars.

The budget would even allow Medicare to fall into insolvency in 2026 and the Social Security trust fund to be depleted in 2033. Both programs are in need of reform to achieve better results for those who depend on them.

That doesn’t even include across-the-board tax increases from ending the Trump tax cuts for individuals beginning in 2026. All Americans’ tax rates would increase under Biden’s plan, and the standard deduction would be cut in half.

The tax increases would also be devastating for American businesses. A proposed 7 percentage point corporate tax rate hike would give the United States the highest corporate tax rate among the 38 Organization for Economic Cooperation and Development nations.

Research shows that labor bears between 75% and 100% of the burden of corporate tax increases in the form of lower real wages and reduced employment.

Under Biden’s plan, business expensing for capital investments would start phasing out at the end of this year, making it more expensive to add manufacturing capacity or new equipment.

Biden is even proposing a first-of-its-kind tax on unrealized capital gains in an attempt to tax the assets of wealthy Americans. Falsely billed as a “billionaire minimum income tax,” this convoluted wealth tax proposal would result in less investment in America, reduced income for workers, and more power for bureaucrats, lawyers, and accountants.

All the new tax provisions mean more money for the IRS. The budget calls for an 18% boost in the agency’s funding.

On top of the many problems with the spending, taxes, and policies in this budget, it’s also loaded up with gimmicks and rosy economic assumptions—including a reserve fund that could be used to sneak trillions of dollars of new big-government programs on top of what’s directly proposed in this budget.

We know that the excessive government spending, burdensome taxes, and costly regulations called for under this budget are a recipe for economic stagnation. Despite that, the Biden administration imagines its budget will produce low inflation, steady growth, and low unemployment, when in reality, the opposite would be likely.

The president is required by law to submit his budget by the first Monday in February. Biden blew through that deadline and is filing his budget documents nearly two months after they were due.

This blatant disregard for the law and process is just another example of the lack of discipline from Biden and his administration.

In summary, then, the Biden budget is irresponsible and would be harmful for American families in many ways.

Congress needs to turn the tide of federal overspending and inflation. The first step would be to reject Biden’s budget request and efforts to revive the failed Build Back Better big-government socialist spending bill.

Instead, lawmakers should adopt a Budget Blueprint to roll back excessive government spending, prioritize taxpayer dollars, reform major entitlement programs, restore federalism, promote opportunity for all, and protect rights and our American values.