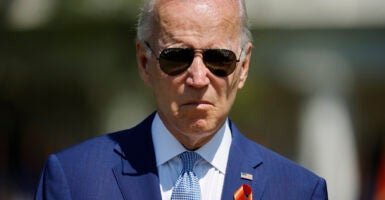 The June inflation numbers are a disaster, coming in at a 40-year high of 9.1%.

After the Biden administration’s repeated victory laps crowing about “the fastest-growing economy in the world” and how we’re “stronger economically” than ever, the downward spiral is feeding a growing consensus that President Joe Biden and his Democrats in Congress are actively making things worse.

According to official numbers, prices rose 1.3% on the month, which translates to an annualized pace of nearly 17%.

Controlling for manipulated housing statistics, the numbers are even worse: 1.7% on the month, which comes to 22% annualized.

These price hikes are crushing families. Real wages are down 3.7% over the past 12 months, nearly a 40-year record, meaning a typical family now pays more than $1,900 a year in inflation tax.

Ominously, the June figures show huge price jumps in staples such as flour, eggs, and butter that are essentials for families.

On July 12, the widely watched NFIB Small Business Optimism Index fell to its lowest level since the 2008 financial crisis. The index now is substantially lower than the recessions in 2001 and 1991, in fact lower than the worst depths of the COVID-19 lockdowns. Small business, the lifeblood of our economy, is on life support.

Given last year’s inflation, Wall Street and the Fed expected the year-on-year number to slow down, especially as they thought price hikes were caused by COVID-19 and would go away soon. Instead, inflation is accelerating.

The problem is that it takes more than transitory distortions to make durable, economywide inflation. It takes either an enormous flood of fresh money or systematic government policies that crush production.

In fact, the federal government is delivering both.

Since the pandemic, the government has flooded the economy with $6 trillion in deficit spending, nearly all helpfully converted to cash by a lapdog Federal Reserve. This tsunami of money crashed into production already crushed by capricious lockdowns.

Even as Democrats reluctantly abandoned lockdowns, they were busy unleashing a flood of new restrictions targeting energy production and distribution, farmers, manufacturing, logistics, and small businesses, often using the environment, unions, or COVID-19 as the excuse.

Of course, if Biden and congressional Democrats had their way, it would be far worse: The Senate came within a few votes of passing Biden’s so-called Build Back Better plan, which would have handed trillions to special interests while hobbling the economy, exploding inflation, and driving shortages far beyond baby formula. The goofy Green New Deal might have spent $93 trillion—over a million dollars per family—on top of economy-crushing mandates.

In sum, this administration and congressional Democrats are doing everything they can to drive inflation higher.

What would stop the chaos? Simple: Rein in federal spending and end the war on production. Radically scale down the handouts, the regulations, and extortionate taxes that strangle businesses, factories, and the tens of millions of workers they employ.

If the Biden administration and congressional Democrats are serious about ending the pain for American workers and American families, they need to follow that lead: End the wasteful trillions in spending, end the increasingly catastrophic war on production.

If we do not get a handle on this crisis, indeed on the mentality driving this progressive takeover of the economy, it won’t just crush this economy. The life prospects and future of the next generation will be in jeopardy.