Why Are Conservatives Happier Than Liberals? 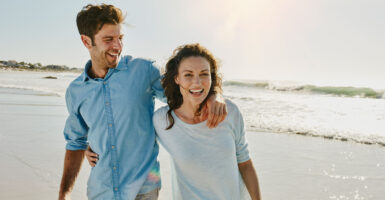 Studies have found that marriage tends to make people happier, and conservatives are more likely to be married. (Photo: Westend61/Getty Images)

It may be one of the most surefire findings in all of social psychology, repeatedly replicated over almost five decades of study: American conservatives say they are much happier than American liberals.

They also report greater meaning and purpose in their lives, and higher overall life satisfaction. These links are so solidly evidenced that, for the most part, modern social scientists simply try to explain them. They’ve put forth numerous possible explanations.

There are a couple clear contributors to point out first. Marriage tends to make people happier, and conservatives are more likely to be married. Religious belief is also linked to happiness, and conservatives tend to be more religious.

But these explanations don’t account for the entire gap, which equates to about a half-point on a four-point scale, a sizable happiness divide.

The portrait of conservatives that emerges is different from the view that conservatives are generally fearful, low in self-esteem, and rationalize away social inequality.

Conservatives are more satisfied with their lives, in general … report better mental health and fewer mental and emotional problems (all after controlling for age, sex, income, and education), and view social justice in ways that are consistent with binding moral foundations, such as by emphasizing personal agency and equity.

Liberals have become less happy over the last several decades, but this decline is associated with increasingly secular attitudes and actions.

There have been a few studies that attempted to rain on conservatives’ happiness parade. In one, scientists proposed that conservatives might simply be more inclined to provide socially desirable answers to surveys than liberals. Society expects you to be happy, and so conservatives say that they are.

In another, researchers found that while conservatives certainly report being more happy than liberals, liberals tend to display more signs of happiness, as evidenced by uploading more smiling photographs on Linkedin and posting more positive tweets on Twitter. So, maybe conservatives just think they’re happier, or judge happiness differently?

Regardless, the gap remains. So, if you need some cheering up, maybe turn to a conservative friend, rather than a liberal one.

Ross Pomeroy is editor of RealClearScience.com.