Why US Needs to Remain Engaged With Bulgaria 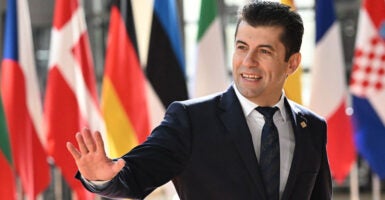 Then-Bulgarian Prime Minister Kiril Petkov—seen here arriving in Brussels on May 31 for a European leaders' meeting to discuss the Russian invasion of Ukraine and other issues—is a Harvard graduate known for his anti-corruption, pro-Western, and pro-NATO stances. (Photo: Emmanuel Dunand/AFP/Getty Images)

Katherine Birch was an intern with the Douglas and Sarah Allison Center for Foreign Policy Studies at The Heritage Foundation and a member of Heritage's Summer 2022 Young Leaders Program.

Bulgaria is a U.S. NATO ally situated along the shores of the Black Sea, in a region now top of mind for efforts to deter further Russian aggression and mitigate Chinese influence in southeastern Europe.

Strengthening the long-standing U.S.-Bulgaria bilateral relationship provides Sofia with a robust alternative partner in the West to support that nation against those ever-looming threats.

Russia’s invasion of Ukraine has not only underscored the security challenges of the region, but also exposed deep fault lines within Bulgaria itself, demonstrated by recent pro-Ukraine and pro-Russia protests across the country.

Politically, Bulgaria has been buffeted by continuing instability that has ramifications for not only the Balkan nation itself, but for its neighbors in the region as well.

Domestically, the coalition government previously led by now former Prime Minister Kiril Petkov—a Harvard graduate known for his anti-corruption, pro-Western, and pro-NATO stances who leads the centrist “We Continue the Change” party—recently returned the mandate unfulfilled to form a new government having been unable to assemble majority support.

That failure came after the coalition failed to make a political comeback following a no-confidence vote held in June.

Last month, the Socialist Party was given a mandate to form a government, after the center-right GERB party, the second-largest in parliament, returned the mandate, having been unsuccessful in forming a government. The Socialists are unlikely to have success either, paving the way for snap elections, which could happen as early as the fall.

Bulgaria, suffering from high energy costs and high inflation, has been “ground zero” for an expansive Russian disinformation campaign that has only intensified since the start of Russia’s invasion of Ukraine in late February.

Commenting on the recent social turmoil over relations with Ukraine, one Bulgarian analyst noted, “Bulgaria has been a target of systematic disinformation campaigns for years, and those efforts are paying off now.”

Examples of those pernicious narratives include painting Ukrainian refugees as thugs that pick fights with Bulgarian locals and the U.S. as weaponizing the “special operation” in Ukraine as a proxy war against Russia. Russia’s disinformation campaign has borne some fruit in Bulgaria, with a surprising 50% of Bulgarians not blaming Russia for instigating the current conflict.

Then, there’s the issue of energy. Bulgaria was one of the first European Union countries to bear the brunt of the Kremlin’s energy politics when Gazprom, Russia’s state-owned natural gas company, turned off the taps following Bulgaria’s refusal to pay for its gas imports in rubles.

While the country isn’t experiencing a widespread energy crisis at the moment, thanks to its decision to import more gas from Azerbaijan and hastily hash out a liquefied natural gas deal with the U.S., Gazprom’s move to halt natural gas exports to Bulgaria was still an unexpected hit for a nation that imports 73% of its natural gas from Russia.

Despite an alternative gas deal with Azerbaijan, it will be some time before the Interconnector Greek-Bulgarian gas pipeline begins sending Bulgaria natural gas in quantities anywhere near the amount that the Russians were exporting.

Now is not the time for the U.S. to turn its attention away from Bulgaria. The Petkov government was robust in actively speaking out against Moscow by condemning the country for its invasion of Ukraine, expelling 70 Russian diplomats on allegations of espionage, and denying clearance for Russian Foreign Minister Sergei Lavrov to cross into Bulgarian airspace in a diplomatic trip to Serbia.

However, that stance could shift depending on the makeup of the next government, so the U.S. must remain engaged.

In the energy sector, the U.S. could explore long-term U.S.-Bulgaria liquefied natural gas contracts and consider expanding a growing bilateral energy relationship to include crude oil and nuclear power. Such a deepening of ties would help to accelerate Bulgaria’s shift away from its dependence on Russian energy.

The U.S. could also encourage NATO’s Latvia-based Strategic Communications Center of Excellence to collaborate with leaders in Sofia to combat disinformation and improve the government’s strategic outreach to the Bulgarian public.

A recent French-brokered agreement saw Bulgaria lift its veto in exchange for proposed constitutional changes in North Macedonia. No one is especially happy with the agreement, and protests against the deal in North Macedonia were widespread. In Bulgaria, the Petkov government’s decision to support lifting its veto on North Macedonia led to its ouster.

The dispute between Bulgaria and North Macedonia not only contains echoes of talking points eerily similar to those used by the Kremlin in places like Ukraine, but also underscores the necessity of continued U.S. engagement to ensure the region remains on a pro-Western trajectory.

Astride the Balkans and the Black Sea, Bulgaria occupies a critical position in two of the most important still-contested regions of Europe. Russia has used energy and disinformation to erode Bulgarian public support for its Western alliance and sow discord.

It’s vital the U.S. remain deeply engaged, seeking to strengthen key security and energy ties, which should also pay dividends for political stability in Bulgaria down the line.

Editor’s note: The byline has been updated to correct the authorship of this article.