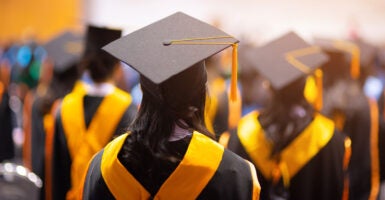 "Disproportionately, the people who hold student debt that went to college are white," says Marc Goldwein of the Committee for a Responsible Federal Budget. (Photo: Getty Images)

“The issue is debt cancellation might reduce the racial wealth gap between two rich doctors, a rich black doctor and rich white doctor, but it actually widens the racial wealth gap overall, because disproportionately, the people who hold student debt that went to college are white, and the 87% of Americans that didn’t go to college are disproportionately people of color,” Marc Goldwein, who also serves a senior policy director for the Committee for a Responsible Federal Budget, told CNN host Poppy Harlow.

Goldwein offered alternatives to debt forgiveness that could address the “racial wealth gap.”

“A more targeted approach would focus on fixing income-driven repayments and more importantly on getting college affordability in the first place,” he said. “That means pushing colleges to accept more AP credits and transfers from community colleges, more no-frills degrees, cutting out some of the administrative waste. That’s what we really need to make college affordable, not send a $10,000 gift to people that already have, in many cases, already advanced degrees.”

Goldwein also said that Biden’s proposal could add inflationary pressure to the economy, making it harder to control inflation.

“We’re probably going to do more to increase inflation from debt cancellation than any inflation reduction from the Inflation Reduction Act,” Goldwein said.

Goldwein described ways the debt cancellation would affect efforts to combat inflation, with the consumer price index rising 8.5% year-over-year in July, following year-over-year increases of 9.1% in June and 8.6% in May.

“What this is going to do is make it more difficult for us to get inflation down to 2% or 3%, which is where it really should be,” Goldwein said. “It is going to make the Fed’s job harder and that means it’s going to increase the risk they have to drive us into a recession to get inflation under control.”

“One of the easiest ways to do that is to ask people to start paying back the debt they already owe, start making the principal payments they already agreed to, and, by the way, while not everybody that has student debt is rich, disproportionately student debt is being held by people that have advanced degrees and pretty good income and they can bear it a lot more than everyday Americans that are seeing the cost of their gasoline and clothing go up,” he said.

The White House did not immediately respond to a request for comment from the Daily Caller News Foundation.