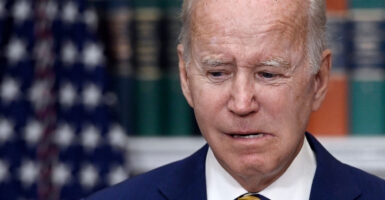 While talking with a group of young people at the White House during an on-camera interview published Sunday by NowThis News, Biden said he had “just signed a law” that would forgive $20,000 in student debt for Pell Grant recipients and $10,000 for all borrowers earning less than $125,000 a year.

“It’s passed. I got it passed by a vote or two, and it’s in effect,” Biden said.

Actually, Biden used executive action and not a bill passed by Congress to institute his plan to cancel student debt. The president didn’t sign the plan into law and Congress didn’t vote on it because he acted independently of the legislative branch.

“We have a president who is so delusional he actually thinks this is a plan that we voted on in Congress,” Rep. Ralph Norman, R-S.C., told The Daily Signal in an email Tuesday.

“Let me be clear—Joe Biden’s student loan cancelation plan did not go through the proper legislative process of being voted on by the House and by the Senate,” Norman said. “It is disturbing that our president does not understand how crucial the legislative process is to the balance of our democracy.”

The 8th U.S. Circuit Court of Appeals placed a temporary hold Friday on Biden’s student loan forgiveness plan, preventing the administration from beginning to forgive borrowers’ debt, a move Norman said he is “encouraged” by.

“Someone needs to stand up to the current administration before $400 billion in private debt is handed over to the taxpayers,” Norman said.

Why Did Court Block Biden Plan?

U.S. District Judge Henry Autrey in St. Louis ruled that the six states don’t have standing in the case.

The requirement for standing means that “a court doesn’t have jurisdiction to hear a case unless a party has suffered a concrete injury that is caused by the other party that they’re suing and that a court has the power to fix,” GianCarlo Canaparo, a senior legal fellow at The Heritage Foundation, told The Daily Signal.

After Autrey dismissed the case, the six states immediately appealed to the 8th Circuit, which is reviewing the standing issue.

Canaparo says the appeals court could make its decision on standing by the end of the week.

“My guess is the 8th Circuit will say that at least one of the states has standing, probably Missouri,” Canaparo said.

If the federal court rules that standing exists, the case will go back to the district court for a hearing for a preliminary injunction on the merits of the case. The 8th Circuit “will probably lift the stay while the lower court hears the merits argument, which means that there will be a window of time during which Biden can move ahead” with loan forgiveness, Canaparo says.

In his assessment, Canaparo said, the Biden administration is “playing for time.”

The administration “should know … that they’re going to lose if they go to court,” Canaparo said. “They almost certainly know this, but they don’t care because they also know that if they can forgive loans, judges probably can’t rewind it.”

Jack Fitzhenry, a senior legal policy analyst at The Heritage Foundation, said it is possible the 8th Circuit will keep the stay on Biden’s loan forgiveness program as the case moves forward.

The Biden administration argues that it is using power included in the Higher Education Relief Opportunities for Students Act, known as the HEROES Act, to forgive student loan debt.

Since its passage 19 years ago, “never once has [the HEROES Act] been used to actually cancel student debt, Fitzhenry said. “It’s always been used to modify the terms of repayment for debtors.”

The Biden administration’s effort to cancel student loans is “not a response to a real emergency,” Canaparo added. “It’s just a cover for a political agenda.”