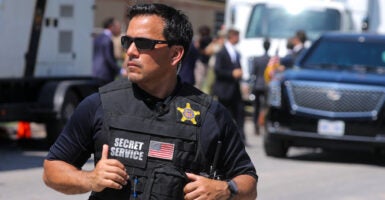 A Washington, D.C., man pleaded guilty Monday for charges related to a scheme where he allegedly bought off Secret Service agents, according to a statement from the U.S. Attorney’s D.C. Office.

Arian Taherzadeh, 40, was charged with federal conspiracy offense and two D.C. offenses of unlawful possession of a large-capacity ammunition feeding device and voyeurism, according to plea documents.

Between December 2018 and April 2022, Taherzadeh allegedly pretended to be a Department of Homeland Security special agent, a member of a federal task force, a former United States air marshal, and a former Army Ranger, according to the plea documents.

Taherzadeh allegedly used the fake persona and business to lease apartments in three Washington apartment buildings, which resulted in $800,000 in unpaid rent and other fees, according to the U.S. Attorney’s Office. In one of the apartments, Taherzadeh allegedly had an unlicensed gun with five fully loaded large-capacity ammunition feeding devices, containing 61 rounds of ammunition.

Some of the apartments, among other lavish items, were gifted to Secret Service agents in an attempt to win their trust, according to the plea documents.

The FBI arrested Taherzadeh and Haider Ali, 36, both of whom allegedly pretended to be federal agents, on April 6. A federal judge granted bail for both of the accused on April 12, allowing them to stay with relatives in the area under GPS monitoring.

The Daily Caller News Foundation watched as the FBI raided the apartments in April, carrying boxes with pictures of rifles on them out of the building and filling a truck full of evidence boxes.

Taherzadeh said he will cooperate with the government’s investigation, according to the U.S. Attorney’s Office.

Neither the Secret Service nor DHS responded to The Daily Caller News Foundation’s requests for comment.