Taxpayers May Be on the Hook for Another Massive Bailout. This Time, It’s Unions Who Might Benefit. 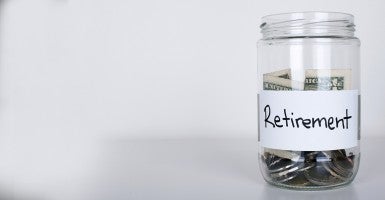 If you’re a worker and you have a pension, there’s a government agency that will pay that pension if your company is unable to fulfill the financial promises made to you and your colleagues.

There’s just one catch: That government agency has a massive deficit right now.

According to the recently released 2014 annual report from the Pension Benefit Guarantee Corporation, the deficit in PBGC’s multiemployer program increased from $8.6 billion in 2013 to $42.4 billion in 2014.

This massive deficit is problematic for the millions of workers who stand to receive mere pennies on the dollar in promised pension benefits.

It’s also a problem for taxpayers, who could be charged with bailing out private-sector pensions that were never intended to be public liabilities.

Both policymakers and the public have paid relatively little attention to the dire financial status of PBGC’s multiemployer program. This year’s report of a five-fold deficit increase may help expose an overlooked problem.

The sharp increase is primarily the consequence of 10-year budgeting. As a government entity, PBGC subscribes to the typical 10-year budget window, but in doing so, it excludes all potential liabilities that are expected to occur outside the 10-year window. Therefore, the stream of future benefit payments from plans that are expected to become insolvent 11 or more years in the future are excluded from PBGC’s reported budget.

Although not specifically cited in the report, the two large plans are elsewhere identified as the Central States Teamsters and United Mineworkers. According to testimony from the Government Accountability Office, the insolvency of one of these very large pension funds would quickly bankrupt PBGC’s multiemployer program, leaving many PBGC beneficiaries with mere pennies on the dollar in promised benefits.

In general, multiemployer plans are given far more freedom over factors, such as interest rate assumptions, that dictate required contributions from employees to their pension plans. Within PBGC, the multiemployer program has significantly lower premiums that lack any risk-based component. In addition, insolvent multiemployer pension plans are allowed to continue operating outside PBGC’s authority even after bankruptcy.

Although some differences in plan governance may be warranted, the drastically different financial trends of multiemployer versus single employer plans suggests stricter rules are needed for multiemployer pensions.

Policymakers should seek immediate reforms, such as stricter rules governing multiemployer pension plans and transforming PBGC to a more private-like insurance structure. Without significant and immediate reforms, millions of workers’ promised pension benefits could be drastically cut or a federal bailout could force taxpayers to bear private-sector pension costs.