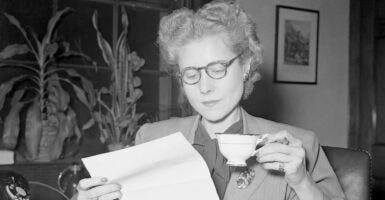 Rep. Clare Boothe Luce, who represented Connecticut's 4th District, drinks a cup of tea while reading a letter. She is set to be included in the "National Garden of American Heroes." (Photo: Bettmann/Getty Images)

Citing the recent toppling of statues of historical figures, President Donald Trump has announced the names of the 244 people who will be honored in what he calls the “National Garden of American Heroes.”

“The heroes of 1776 have been desecrated, with statues of George Washington, Thomas Jefferson, and Benjamin Franklin vandalized and toppled,” Trump states in the executive order, adding: “The National Garden is America’s answer to this reckless attempt to erase our heroes, values, and entire way of life.”

“When the forces of anti-Americanism have sought to burn, tear down, and destroy, patriots have built, rebuilt, and lifted up,” Trump writes in the order. “That is our history. America responded to the razing of the White House by building it back in the same place with unbroken resolve, to the murders of Abraham Lincoln and Martin Luther King, Jr., with a national temple and the Stone of Hope, and to the terrorism of 9/11 with a new Freedom Tower.”

“In keeping with this tradition, America is responding to the tragic toppling of monuments to our founding generation and the giants of our past by commencing a new national project for their restoration, veneration, and celebration,” the president continued.

While the location of the National Garden of American Heroes hasn’t been set yet, the garden will honor 244 people “for embodying the American spirit of daring and defiance, excellence and adventure, courage and confidence, loyalty and love,” according to the executive order, which also states, “Astounding the world by the sheer power of their example, each one of them has contributed indispensably to America’s noble history, the best chapters of which are still to come.”

According to the Monday executive order, the garden is set to be a statuary park with a task force called the Interagency Task Force for Building and Rebuilding Monuments to American Heroes in charge of planning the National Garden of American Heroes.

Here are the 244 people Trump said he wants to be honored in the Garden of American Heroes.

13. Clara Barton, nurse and founder of the American Red Cross

16. Roy Benavidez, Medal of Honor recipient for actions during the Vietnam War

29. Charles Carroll, signer of the Declaration of Independence

30. John Carroll, first bishop and archbishop in the United States

33. Joshua Chamberlain, former governor of Maine and recipient of Congressional Medal of Honor for actions during the Civil War

55. Joseph H. De Castro, first Hispanic-American to be awarded the Medal of Honor

58. William “Wild Bill” Donovan, head of the Office of Strategic Services, the precursor to the Central Intelligence Agency, during World War II

77. George Fox, founder of the Quakers

95. Nellie Gray, founder of the March for Life

96. Nathanael Greene, major general of the Continental Army in the American Revolutionary War

98. Nathan Hale, soldier and spy for the Continental Army during the American Revolutionary War

132. Jeane Kirkpatrick, first American woman to serve as ambassador to the United Nations

147. William Mayo, physician and one of the founders of the Mayo Clinic

148. Christa McAuliffe, teacher and astronaut who was killed in the Space Shuttle Challenger disaster

155. William “Billy” Mitchell, army general who is honored as the father of the United States Air Force

158. John Muir, known as the father of the national parks

163. Jesse Owens, track and field athlete and four-time gold medalist in the 1936 Olympics

167. William Penn, founder of the English North American colony, the Province of Pennsylvania

169. John J. Pershing, commander of the American Expeditionary Forces in World War I

171. Clark Poling, United States Army lieutenant and chaplain who gave up his life jacket to another and drowned during World War II

191. Sacagawea, who assisted in Lewis and Clark expedition

197. Elizabeth Ann Seton, first citizen born in the United States to be given the title of “Saint”