Those Who Carried Out Operation Choke Point Should Face Penalties 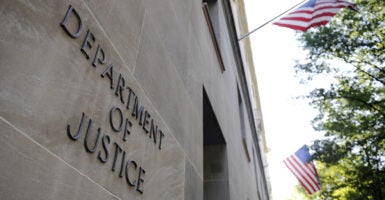 "The regulators knew all along their political vendetta was unlawful. They participated anyway," writes Ken Braun. (Photo: Jonathan Ernst/Reuters/Newscom)

Ken Braun is a Michigan-based freelance writer and policy researcher. He has worked as a legislative aide in the Michigan House of Representatives and with several think tanks and policy organizations.

Last August, the Department of Justice more or less told Congress it would no longer help the Federal Deposit Insurance Corp. break the law. The real crime is that there won’t be any punishment.

Of course, the nation’s highest law enforcement authority didn’t so plainly admit to aiding unlawful activity. The Justice Department now run by President Donald Trump appointees characterized “Operation Choke Point” as a “misguided policy” that the Federal Deposit Insurance Corp. had roped it into during the Obama administration.

Announcing the end of the policy, it declared that “law-abiding businesses” would no longer be subjected to “enforcement actions” merely for participating in an industry “that a particular administration might disfavor.”

Going forward, the Justice Department promised that “facts and applicable law” would once again be the standard for enforcing the law.

That’s the lawyerly way of saying that a political vendetta, rather than laws passed by Congress, had been the government’s previous standard in regulating law-abiding businesses.

“I don’t like this product and I don’t believe it has anyplace in our financial system,” said a senior Federal Deposit Insurance Corp. regulator to a banker, whose sin was to consider a lawful business relationship with a payday lender. “Your decision to move forward will result in an immediate unplanned audit of your entire bank.”

In other words: Do something legal that we don’t like, and I’ll inflict extraordinary and excessive harassment.

A director from the Federal Deposit Insurance Corp.’s Chicago region told the Office of Inspector General this had become official policy, and that a senior director during the first year of the Obama administration informed subordinates that banks doing business with payday lenders should be required to “submit a plan” for dumping those customers. The senior official denies giving this order, but the behavior of the underlings shows they got the message anyway.

The regional director in Atlanta aggressively took to the job, bragging to his overlords in a 2012 Thanksgiving Day email that he’d scared a banker away from a payday lender and that “that is something to celebrate on Thanksgiving!” Days later he wagged his tail some more: “I have never said this to you (but I am sincerely passionate about this) … but I literally cannot stand payday lending.”

Though committed to the mission, the Atlanta director was sheepish about outsiders finding out. One local banker reports being muscled into dropping a payday lending customer by the Atlanta team, a full-court press of threats the banker says even included a not-subtle suggestion that bank directors could be subjected to a criminal prosecution.

But internal Federal Deposit Insurance Corp. emails afterward show the regulators wanted the banker to accept all the blame for terminating the relationship—to tell the customer it was a “business decision” and not rat out the government’s bullying behavior.

Avoiding scrutiny was a common theme as regulators seemed to know they were coloring outside the legal lines. A disgruntled banker complained about the Federal Deposit Insurance Corp.’s ham-fisted threats to the Chicago office in June 2013.

In internal emails discussing this case, one Federal Deposit Insurance Corp. official admitted to another that threatening regulatory hellfire (what the regulators euphemistically call “moral persuasion”) was the only tool available to drive banks away from payday lenders because “as you know from a legal perspective we don’t have much of a position, if any.”

Payday lenders are now suing the Federal Deposit Insurance Corp., seeking little more than to get their good name back (an admission that they shouldn’t be stigmatized as a high-risk industry), and a ruling that the regulatory abuse was unlawful.

Good for them, but not good enough for us. The regulators knew all along their political vendetta was unlawful. They participated anyway. They or others like them will behave similarly again if given marching orders to do so. And it’s easy to think of businesses (perhaps abortion providers) that could be subject to similar assaults under a Republican president.

All lawful regulations are ultimately backed by the promise of violence. Ignore the law long enough, and rough people with guns must be sent to enforce it. Police literally enforce government policy at gunpoint, but when they color outside the law they can be prosecuted and even imprisoned.

Unlike police, the Federal Deposit Insurance Corp. zealots didn’t have to fear federal charges, or even a federal prison, when they set out to deliberately destroy a law-abiding industry with unlawful behavior. That’s a regulatory loophole Congress and the president should close.