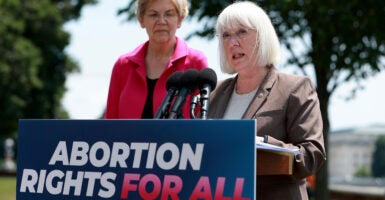 Flanked by Sen. Elizabeth Warren, D-Mass., Sen. Patty Murray speaks at a press conference on abortion outside the U.S. Capitol on June 15. Murray is the sponsor of a radical pro-abortion bill, the Freedom to Travel for Health Care Act of 2022, which critics say is "a solution in search of a problem." (Photo: Joe Raedle/Getty Images)

Pro-abortion activists are angry. They want Democrats in Washington to produce a cohesive plan to limit or overrule the Supreme Court’s Dobbs decision that undid Roe v. Wade.

Democrats, in turn, are scrambling to do anything they can to extend abortion on demand, which, for nearly 50 years, they could take for granted.

Last week, leftist senators introduced the Freedom to Travel for Health Care Act of 2022. Led by Sen. Patty Murray, D-Wash., the bill is a response to the claim that “radical” pro-life states might pass laws prohibiting women from traveling across state lines for an abortion.

But the bill is a solution in search of a problem.

Prohibiting such travel would clearly violate the Constitution. A state has the right to decide whether it will protect unborn life, but it has no right to impose its own laws on another state or limit the travel of its residents.

The Murray bill prohibits any person or government from restricting, discriminating against, or taking legal action against three groups of people: Women seeking an out-of-state abortion; an individual, entity, or nonprofit organization assisting with transportation; and a health care provider who performs an abortion on a woman traveling from a pro-life state.

Taking a page out of Texas’ playbook, the bill includes a private right of action against anyone who gets in the way.

Key parts of the bill pertain to where the doctor may perform an abortion. An initial reading of the text affirms the woman’s constitutional right to travel for medical care. Albeit poorly worded, the bill affirms a medical provider’s right to perform an abortion if he or she meets two requirements: The provider must be licensed in the state where the medical procedure would occur, and abortion must be legal in that state.

States such as California, New York, and Connecticut have passed “safe harbor” laws that enshrine themselves as abortion “sanctuaries.” Those laws exempt medical professionals from lawsuits or subpoenas from the patient’s home state. They even include funding for travel, child care, and housing. Such laws take advantage of vulnerable women, since they give them little legal recourse for medical malpractice or coercion.

If Murray’s bill were to pass, it would create abortion sanctuaries in every state with abortion access. By protecting doctors or third parties from legal action, it puts both unborn children and women at risk.

On Friday, the House voted to pass two extreme pro-abortion bills. First, the Women’s Health Protection Act, would legalize abortion for all nine months of pregnancy. That goes far beyond anything Roe v. Wade allowed. It threatens religious rights, and no longer requires doctors to save the baby if he or she were to survive the abortion. It passed the House 219-210, on a near party-line vote, with all Republicans and just one Democrat voting against it.

The second bill, the Ensuring Access to Abortion Act, is like Murray’s legislation, but with an added protection for chemical abortion pills. Four of the five “protections” address doctors and women seeking an abortion. The bill ensures doctors can perform an abortion in states where they are licensed, and where it is legal. A woman traveling from another state must abide by the same guidelines for protection, too.

The fifth protection, however, ensures the free movement of chemical abortion pills across state lines. To make matters worse, it does not say it will send the abortion pills only to states where abortion is legal. Nor does it require doctors to be licensed in the state where they send the pills via telemedicine.

That bill passed the House 223-205, with three Republicans joining all Democrats voting in support of it.

If either of these bills were to pass in the Senate, it would destroy all pro-life protections on the state and federal level.

While neither bill has much chance of passing the Senate, Democrats are desperate to appease their pro-abortion base.

Murray’s opening remarks at the Senate Health, Education, Labor & Pensions Committee hearing Wednesday on “Reproductive Care in a Post-Roe America” accused Republicans of forcing women to remain pregnant against their will and to risk death if they are diagnosed with an ectopic pregnancy. Murray blurs the line between a pregnancy ending by natural means, like a miscarriage or ectopic pregnancy, and a pregnancy ending through abortion.

By calling pregnancy—a natural and life-giving process—a “medical procedure,” she implies that abortion, by contrast, is a natural option all women desire.

That’s not the case. As Brandi Swindell, CEO of Stanton Healthcare and the Stanton Public Policy Center, testified at the same hearing, many women report feeling pressured into an abortion they did not want by a parent, husband, or boyfriend.

Murray’s bill is meant to look like it’s addressing a real issue, but it’s not. The bill claims to ensure women can travel across state lines for “reproductive care.” But they already have that right under the Constitution.

Instead, the bill would protect doctors from liability and increase the use of chemical abortion pills, minors traveling across state lines, and state funding for abortion travel.

By attacking the work of pregnancy care centers and maligning pro-life efforts, Democrats reinforce an incentive structure dangerous to women and deadly for their preborn children.