To End Abortion, Changing Hearts Is Even More Important Than Changing Laws 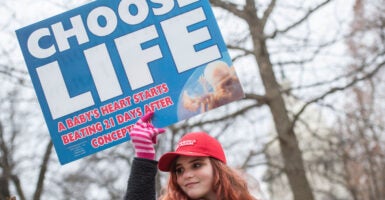 Charissa DiCamillo, then 18, of Glenmore, Pa., shows how she feels about abortion during the annual March for Life demonstration in Washington, D.C., on Jan. 24, 2020. (Photo: Tom Williams/CQ-Roll Call/Getty Images)

Father Dave Pivonka, TOR, is the president of Franciscan University in Steubenville, Ohio.

I’ve attended the March for Life in Washington, D.C., numerous times since they began in the mid-1970s, but this year, I have a sense of anticipation and excitement like I’ve never experienced before.

Along with other pro-lifers around the country, I’m encouraged to see better protections for our smallest citizens in Texas and Alabama. I’m also encouraged to see the U.S. Supreme Court take up Dobbs v. Jackson Women’s Health Organization, a case out of Mississippi that some observers think could open the door to overturning Roe v. Wade almost 50 years after it effectively removed every legal protection from preborn human beings.

We can celebrate those milestones as real progress, and if even one innocent baby is saved as a result, then the decades of struggle, prayer, and sacrifice have been worth it.

Every single human life has such profound value, meaning, and purpose, beyond anything we can imagine.

Tragically, abortion will not disappear in the United States even if Roe v. Wade, the 1973 high court ruling that legalized abortion nationwide, is overturned. Instead, the battleground will simply shift, and the fight against abortion will continue as each state seeks to regulate abortion for its residents—and depending on where we live, the new abortion laws may very well be more horrific than they are now.

That’s why we do well to remember that a change of hearts, not merely a change of law, must be the goal of the pro-life cause. That’s because abortion is ultimately a question of the heart, a question of recognizing the beauty of each human life.

We pray for the hearts of all babies, that abortion will not stop them from beating. Yet our endgame must also include a change of millions of older hearts, so our whole culture respects human life at every stage.

Now, only God can create a human heart. Only He can change the hearts of those who do not yet recognize the dignity of each person—but we can help.

An article I read recently about one of our online master’s degree students at Franciscan University illustrates this beautifully.

Nineteen and unmarried, Kelly planned to abort her baby for the sake of her career—and attempted to do so three times. The first time, she was put off by a chance remark from the abortion clinic receptionist; the second, by people praying outside the clinic; and the third time, stalled in traffic as her appointment time came and went, Kelly saw a “Choose Life” license plate on the car ahead of her.

I doubt the people praying outside the clinic or the owner of that license plate have any idea how powerful their prayers and witness were. But at least in part because of them, Kelly and her boyfriend’s hearts were changed, and they chose life for their son. They married, and Kelly went on to start a pregnancy resource center.

Later, convinced that “abortion is the consequence of a culture that’s denied the dignity of the human person” and of the need to reach women before they head to an abortion clinic, she co-founded the Pelican Project, an online resource to support parents in educating their children about the sanctity of life.

Like Kelly, we need to pray and work for the transformation of hearts to love for life, particularly for the hearts of those most vulnerable and particularly those who cannot see the innate dignity of the human person.

We need to be Christ for others, to love them, to show them kindness and mercy, and trust that God will use our efforts to bring change—the change that does not depend on the courts or the legislature, but on the conviction of our culture that every human life deserves protection and should receive it from conception to natural death.