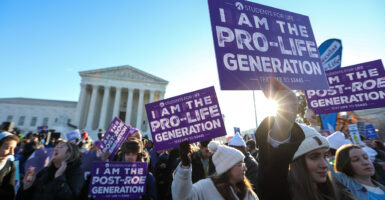 Wednesday was a historic day for life. Thousands of Americans gathered outside the Supreme Court to express their support for the unborn as the nine justices heard oral arguments in a case that could overturn Roe v. Wade. (Photo: Yasin Ozturk/Anadolu Agency/ Getty Images)

The Supreme Court on Wednesday heard oral arguments in a case that could result in the overturning of Roe v. Wade, the 1973 ruling that legalized abortion nationwide. While the nine justices considered the future of the country’s abortion laws, thousands of Americans gathered outside the court to express their views on the subject.

Melanie Israel, a Heritage Foundation policy analyst, spoke at a rally outside the court and says she was encouraged to see so many pro-life Americans boldly expressing their support for life. (The Daily Signal is the news outlet of The Heritage Foundation.)

It was a “very positive environment, a very energetic environment,” Israel said of the pro-life rally that drew attendees from across the nation.

In 2018, Mississippi passed a law restricting abortions after 15 weeks of pregnancy. The state’s only abortion clinic filed a lawsuit to block the law, and now it’s up to the nine justices to determine whether states have the right to restrict abortion in the way Mississippi did. If they answer in the affirmative, that would effectively overturn the precedent set by Roe v. Wade and send power back to the states to determine their own abortion laws.

Israel joins the “Problematic Women” podcast to discuss the implications of the case, and her takeaways from the arguments before the Supreme Court.

Also on today’s show, we explain what we do—and don’t—know about the new COVID-19 variant, and we celebrate Americans who are standing up for freedom and fighting against President Joe Biden’s vaccine mandate. Plus, we ring in December by discussing the blockbuster movies and shows everyone is talking about. And as always, we’ll be crowning our “Problematic Woman of the Week.”