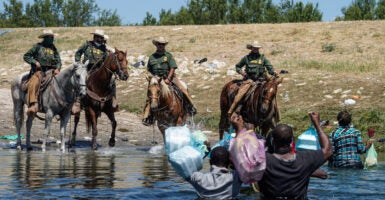 Remember last year, when a few mounted Border Patrol agents were accused of “whipping” Haitian migrants at the southern border?

The media and left-wing politicos and celebrities whipped activists into a frenzy, accusing the Border Patrol of cruelty and actions reminiscent of the days of slavery.

When the story broke, President Joe Biden—a man known to pay careful attention to detail—quickly said the illegal immigrants from Haiti had been “strapped” by Border Patrol agents on horseback.

“I promise you, those people will pay,” Biden told reporters.

However, as the photos were examined and evidence came in, it became clear that no whipping had taken place and that partisans had grossly distorted the actions of the Border Patrol agents.

The story should have died there. But no, there had to be a lengthy official investigation.

After a ridiculous 10 months, the Biden administration found its verdict.

U.S. Customs and Border Protection’s Office of Professional Responsibility last week released a report on the Border Patrol incident, finding that the mounted agents hadn’t strapped anyone, but were guilty anyway and subject to punishment.

Promises made, promises kept, I guess.

The Biden administration’s 500-page report essentially admits that Border Patrol agents didn’t whip the Haitian migrants, which had been quite clear to anyone who earnestly examined the photos and video.

But the administration still threw four agents under the bus, saying that they acted in an “unprofessional” manner and engaged in “dangerous” behavior.

Oh, and they used “vulgar” language.

Wait, doesn’t that make Biden unfit to be president? Different standards, I guess.

It’s clear from the report that the Border Patrol agents were just doing their jobs under difficult and chaotic conditions. Were they supposed to do nothing?

Probably, at least if the Biden administration had its way.

It doesn’t take 500 pages to conclude that the Biden administration found the Border Patrol agents guilty before this ridiculously lengthy “investigation” took place.

One attribute seems to be typical of the Biden presidency. When a catastrophic failure occurs, nobody loses his job and the matter is dropped. The administration dodges questions, distracts the public, and blames someone else when the people don’t buy it.

If, after all that, Americans aren’t buying it, the administration’s media allies simply declare the world not fair. Give the man a break, he’s only the president!

It seems this White House was more concerned about “investigating” a few Border Patrol agents to appease its woke supporters than digging into the decision-making in America’s catastrophic, deadly last days in Afghanistan.

The Border Patrol agents don’t deserve punishment for doing their best to enforce our country’s immigration laws and protect the border. Even light punishment, such as the two weeks without pay here. The agents deserve an apology for being falsely maligned and thanks for their devotion to duty.

Furthermore, Americans deserve an apology for the Biden administration’s complete inability to keep the southern border secure. From almost the moment Biden took office, the border has been a sieve. We’ve seen an unprecedented number of illegal immigrants try to cross the border from Mexico, over 1 million in the first six months of Biden’s presidency.

The problem has accelerated this year.

“U.S. Border Patrol agents made 222,656 arrests of people crossing the border illegally, a nearly 10% increase compared with April,” The Wall Street Journal reported. “The agency said about 25% of arrests in May involved repeated border crossers, with agents arresting 177,793 unique people.”

The Biden administration may have been quietly relieved by the ruling. It let the administration signal to its Democrat supporters that the border would remain open while keeping the situation from becoming an even more profound disaster.

Through its actions, the Biden administration clearly has suggested, despite protestations otherwise, that it’s well worth trying to break American laws to get into this country. The administration has paid millions of dollars to house illegal immigrants in hotels, proposed to end the “Remain in Mexico” policy, and brought back the catch and release policies of the Obama administration.

So even when the Border Patrol catches countless border crossers, they often are released into the interior of the country anyway.

This creates a problem similar to what we are seeing with law enforcement in America: Police officers make arrests, rogue district attorneys refuse to prosecute crimes. Criminals know that they may commit crimes with little consequence. It’s the same issue with illegal immigration.

That’s ultimately the message being sent by Biden’s border policies: You break the law, and the law will give you a break. You try to enforce the law, and you may be maligned and punished.

Throwing these Border Patrol agents under the bus is a cynical and shameful move.

Cynical, shameful, and mostly incompetent apparently is all we should expect from the Biden administration going forward.