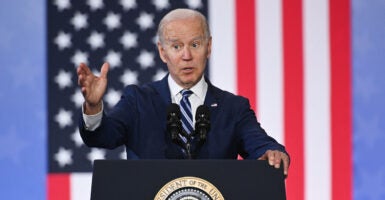 The United States is suffering through its highest level of inflation in 40 years and the White House and its media allies can't stop peddling false narratives to help the president dodge blame. Pictured: President Joe Biden speaks about inflation at the Alumni-Foundation Event Center of North Carolina Agricultural and Technical State University in Greensboro, North Carolina, on April 14. (Photo: Mandel Ngan/AFP/Getty Images)

The United States is suffering through its highest level of inflation in 40 years and the White House and its media allies can’t stop peddling false narratives to help the president dodge blame.

Numbers released April 12 by the Labor Department paint a grim picture of U.S. inflation that rose 8.5% in the past year.

But wait, there’s more. The consumer price index increased by 1.2% in the time between February and March, the “fastest month-over-month figure since 2005,” the Daily Caller reported. Not great.

In short, we’re getting poorer and the things we buy are getting more expensive.

As I’ve noted before, this inflation situation is in many ways worse than the numbers at the end of 1981. President Ronald Reagan expended enormous political capital to get inflation under control, even risking an economic downturn to do so.

It worked and was an example of Reagan’s strong leadership and clear vision.

What did President Joe Biden do? He made things worse.

First, Biden and his congressional partners pumped trillions of dollars into the economy, insisting it wouldn’t cause inflation.

A group of Nobel-winning economists signed on to a letter saying that inflation absolutely wouldn’t follow in its wake and that Congress should pass Biden’s monstrously expensive Build Back Better plan.

It’s clear now that the wild spending very much did fuel inflation that predated the Russian invasion of Ukraine.

Don’t expect an apology or a mea culpa.

Apart from wildly spending, the administration has desperately fumbled around looking for other things and people to blame. It’s Russia, it’s corporations, it’s the governor of Texas!

You don’t believe all of that? Well, then you must be in “lockstep” with Russian President Vladimir Putin, says a White House adviser.

That the White House is spinning and doing overtime work to direct blame elsewhere isn’t remarkable. It’s kind of its thing, especially given how unpopular the president and his policies have been.

It wants to create a rosy picture of how everything is going spectacularly by pointing to lower unemployment following a pandemic and an economic shutdown that led to historic job losses. That image is clearly missing a whole lot of context.

What’s worse and revealing is how many left-wing, corporate media companies are essentially gaslighting the American people on the economics issue. Again, this isn’t shocking, but it does say a lot about our current media landscape.

In December, it was reported that major media companies met “in secret” with the Biden administration to discuss how to project a more favorable light on the president’s economic policies and our general economic condition.

Apparently, they haven’t been doing enough to cheerlead for the White House.

No surprise that in the wake of these secret meetings there was a steady flow of “the economy is great, why isn’t Biden getting credit!?” pieces from all the, ahem, reliable sources.

CNN’s Brian Stelter wrote in his “Reliable Sources” newsletter in December that Biden was really fighting a “fight against perceptions” on the economy and elsewhere. Stelter, very much in character, blamed Fox News for the problem.

It wasn’t just sources as obviously slanted as Stelter that were running with this message.

“President Biden’s first year in the White House has ushered in record job gains, unprecedented wage gains for low-income workers, and GDP growth not seen in decades,” read the opening of a National Public Radio piece in February.

NPR then said polls indicated Americans were “deeply cynical” about how Biden is handling the economy. Maybe they weren’t just being cynical. Maybe they were being realistic and understood that cherry-picked data didn’t reflect an accurate picture of the country’s economic health.

PBS ran an Associated Press article with the headline in early April, “Biden Trumpets Economic Gains, but Struggles to Get Credit.”

Why aren’t you giving Biden more credit, you economic ignoramuses?

U.S. News ran the headline “Biden’s Deceptively Strong Economy,” again insinuating that the American people must be confused, the economy is really, really great. All those problems with inflation and astronomical fuel prices are just totally beyond the president’s control, you nitpickers.

Bloomberg wins the prize in the media scramble to add the most flattering superlative to describe the Biden economy.

When the most recent inflation numbers were released, some just couldn’t stop the spin.

It was actually a CNN analyst who finally blasted the idea that the American people just don’t know how good they have it.

“I think there’s this whole the idea, ‘Oh, the White House is just losing the messaging war, you know. If only they knew how good the job situation was,’” said CNN’s Harry Enten. “But if you ask Americans why do you think the economy is bad, it’s inflation. The voters know exactly what’s going on. They’re not stupid. Eighty-six percent say inflation. Only 17% say unemployment, if they believe the economy is in bad shape … They believe the economy is in bad shape because of inflation, and that’s across the board—Democrats, Republicans, independents.”

That’s correct. Through all the messaging, from the White House and the media, Americans understand that rising inflation and fuel prices didn’t just happen out of a clear blue sky or entirely because of Russia.

Those consequences come from policy decisions made by our leaders.

Will the rest of the media realize that the American people aren’t buying the nonsense?