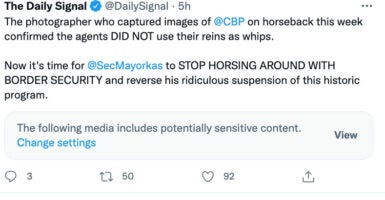 Twitter did not allow users to see the 4-minute video sometime after The Daily Signal and its audience began promoting the story again Thursday evening in response to the debunked reports.  The social media giant restored access to the video Monday afternoon without explaining the three days of censorship.

Initial reports said one or more Border Patrol agents on horseback had used a whip on illegal immigrants from Haiti, basing the allegation on photos from the scene.

The photographer who took the photos in question was among those who debunked the story, saying Friday that the evidence showed mounted agents used long straps to control their horses but did not whip Haitian refugees who had crossed the Rio Grande River into Texas.

Despite such analysis, the Biden administration put one Border Patrol agent on administrative leave and announced an investigation into agents’ use of their horses to block the advance of some of the illegal immigrants.

In response to intense media coverage of the incident and its “horrific images,” The Daily Signal on Thursday evening began to promote its video about a mounted Border Patrol unit, first published on June 25, 2017, and included the video in its Morning Bell newsletter Friday morning.

It is not clear when Twitter began to suppress the video, although it was blocked by 4:30 p.m. Friday. However, when the Twitter account of The Heritage Foundation, parent organization to The Daily Signal, retweeted the video Monday afternoon, it appeared unviewable.

Twitter initially denied censoring the video, but Monday afternoon the tech company said it had flagged the video without saying why, according to The Heritage Foundation. The think tank said Twitter representatives did not respond to questions about whether its censoring of the video was the result of an algorithm or human error.

“Those who serve in the Border Patrol’s Horse Patrol Program are an integral part of those missions, often going where other assets can’t,” Mark Morgan, a former acting director of U.S. Customs and Border Protection, said in a written statement.

Unfortunately, far-left politicians on Capitol Hill and their allies in the media and popular culture have embraced a false, debunked narrative about mounted Border Patrol agents in recent days, in an effort to distract the public from the Biden administration’s open-borders policies and the subsequent historic border crisis the administration has created. These lies and smears against the men and women of the Border Patrol are disgusting, and it’s so unfortunate [that] companies like Twitter are helping advance those lies by censoring the truth.

The Daily Signal’s 2017 video, reported by Kelsey Bolar, focused on the Border Patrol’s horse unit based in San Diego, California.

“Twitter’s decision to restrict access to The Daily Signal’s mini-documentary on the Border Patrol’s Horse Patrol Program is unacceptable and another eye-opening example of Big Tech’s censorship,” Rob Bluey, executive editor of The Daily Signal and vice president of communications for Heritage, said in a written statement.

“The Daily Signal produced this video in 2017—four years before the Biden border crisis—to educate Americans about the important role of horses in the Border Patrol’s work,” Bluey said, adding:

Yet now, when such information conflicts with the left’s preferred narrative, Twitter’s censorship police stepped in with a flagrant case of anti-conservative bias. The Daily Signal’s video received a ‘sensitive content’ warning and Twitter users were blocked from easily viewing it. Twitter should explain how this happened and why it prevented its users from seeing a factual account of the Border Patrol’s use of horses.

Twitter communications officials did not immediately respond to The Daily Signal’s inquiry for this report.

The unfounded attacks on the Border Patrol are disingenuous, said Lora Ries, a senior research fellow at The Heritage Foundation who previously was acting deputy chief of staff at the Department of Homeland Security, parent agency of both Customs and Border Protection and the Border Patrol.

“Instead of censoring conservatives who are providing valuable insights into federal law enforcement personnel and operations, Big Tech should be allowing all voices to take part in the debate,” Ries said. “They’ve clearly failed on that front by censoring this important work on the Border Patrol’s horseback operations.”