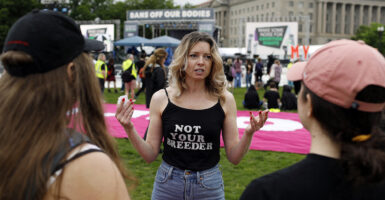 A feminist group hopes to prompt the arrest of 1,000 pro-abortion protesters Saturday outside the White House. Pictured: Tennessee resident Kat Westaway talks with two other women May 14 at the Bans Off My Body March in the nation's capital. (Photo: Robb Hill for The Washington Post/Getty Images)

Activists with the feminist organization Women’s March plan to rally Saturday outside the White House. Their goal? To get arrested.

An online document titled “Summer of Rage Toolkit – July 9th” explicitly says that the objective of the pro-abortion rally is to spur police to arrest participants.

“While we welcome everyone to participate, the action will be centered around folks who are risking arrest,” the Women’s March document reads.

The document contains a section detailing what is likely to happen when protesters are arrested and showcasing possible scenarios once they are in custody.

The rally Saturday is one of pro-abortion activists’ responses to the recent Supreme Court decision overruling its 1973 Roe v. Wade decision legalizing abortion across the nation.

Prior to the event, Women’s March offered training sessions, one specifically designed for those “interested in risking arrest.”

Women’s March was founded in 2017 after the election of President Donald Trump, in response to what organizers called Trump’s sexism. Since its founding, the group has splintered into smaller organizations focused on issues unrelated to women’s rights.

The online document specifies that only adults should attend the rally, because protesters will try to get arrested.

“We are asking those who are under 18 to not participate in this action,” the Women’s March toolkit says. “If you are under 18 and are arrested, you will be taken away from the group, transferred to custody of the Metropolitan Police Department and will be required to be released only to your legal guardian.”

A section answering frequently asked questions helps pro-abortion protesters determine whether it makes sense for them to try to be arrested.

This FAQ section warns illegal immigrants or those in the country on green cards that being arrested might affect their immigration status.

Additionally, the document advises that arrested protesters are more likely to face tougher consequences if they have open court cases, active warrants, or previous felony convictions.

The group plans to gather at Franklin Square, a public plaza 10 minutes away by foot from the White House, before making its way to the executive mansion at 1600 Pennsylvania Ave. NW.

In an email inviting protesters to the rally at the White House, the group estimates a crowd of about 1,000 attendees. However, previous protests indicate that anticipated numbers often are inflated.

The “Summer of Rage” document also contains provisions on what types of signage and other visuals are appropriate to bring.

The document notes that imagery of coat hangers, “The Handmaid’s Tale,” or “TERFs” (trans-exclusionary radical feminists) is not welcome.

It argues that coat hangers “reenforce the right-wing talking points that self-managed abortions are dangerous, scary and harmful.”

Wearing cloaks and bonnets that recall the dystopian novel and TV series “The Handmaid’s Tale,” the document says, “erases the fact that Black women, undocumented women, incarcerated women, poor women, disabled women have always had their reproduction controlled in this country,” and “it’s not some dystopic future or past.”