I’m Pro-Life. Here’s What Happened When I Attended the Women’s March. 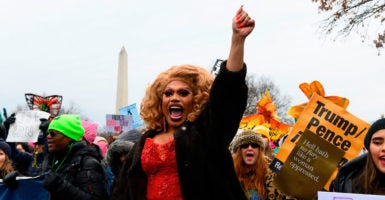 Rachel Summa is a member of the Young Leaders Program at The Heritage Foundation.

Martin Luther King Jr. once wrote: “In the end, we will remember not the words of our enemies, but the silence of our friends.”

As a history major, I study human rights violations like slavery, the eugenics movement, and the Holocaust. Historians usually note that mass conformity and silence are what most drive these crimes against humanity and allow them to persist. As such, society as a whole is usually to blame.

Toward the end of my college career, I began to ask myself, “What will people say about us one day?”

I immediately thought of abortion. I realized that I did not want to be part of the side that stayed silent about this violence, which will define my generation. I began to look for ways I could become part of the pro-life movement, especially in Washington, D.C.

The fourth annual Women’s March, one of the main demonstrations against the pro-life movement, took place on Jan. 18, just two days before the Martin Luther King Jr. Day holiday. Marches took place in Washington, D.C., as well as in New York City and other major cities across the United States.

While this protest claims to represent women, pro-life organizations were excluded from the first Women’s March in 2017. One of the driving forces of the Women’s March is “reproductive freedom,” which advocates expansion of access to abortion and contraception.

Although the first Women’s March three years ago drew hundreds of thousands of protesters, fewer than 10,000 protesters participated in the Women’s March in Washington this year.

Protesters held up signs critical of President Donald Trump and displays with vulgar language and images. The crowds beat on drums, blew whistles, and shouted liberal rhetoric as they marched down Pennsylvania Avenue onto 17th Street Northwest in Washington.

When I realized the Women’s March was happening in the heart of the city, I decided out of curiosity to reach out to Students for Life, to ask whether the group was doing anything to counter the march. Students for Life responded quickly, telling me to meet its team of staff and students on the morning of the protest to demonstrate with them.

We reject the @womensmarch message. Women do not need abortion in order to succeed! pic.twitter.com/W2HZEvtuFS

On my way to meet the Students for Life staff and students Saturday morning, I thought all we would do is hold up anti-abortion signs on the sidewalks as the protesters marched by.

Instead, the staff had planned to join in with the Women’s March. They brought banners aimed at promoting equal rights for the unborn and advocating against the violence of abortion.  The staff brought a Students for Life banner that said “Equal Rights for All Women, Born and Pre-Born.” They also made signs that spelled out “1,500 Lives Lost Every Day Through the Violence of Abortion.”

Members of the Students for Life team signed up for text updates and livestreamed the event so we could be prepared for when the Women’s March approached. Following their rally, the protesters reached Pennsylvania Avenue and 17th Street close to 1 p.m.

As we heard the protest coming toward us, we lined up with our “1,500 Lives Lost” banners and walked about 100 feet in front of the Women’s March, so the news media could see our demonstration as they were preparing for the protest to approach. Together, we chanted, “Abortion Betrays Women. Women Deserve Better.”

After leading the Women’s March onto H Street, we turned to the sidewalk and continued to chant as the protest passed. Naturally, participants came by and pointed fingers at our group and used explicit language. Predictably, they also shouted “My Body. My Choice.”

It only took about 20 minutes for the entire Women’s March to walk past us.

While our entire demonstration consisted of maybe 20 students and Students for Life staff, I’ve learned not to get discouraged over being one of the few witnesses willing to stand against abortion.

Too often throughout my high school and college years, I encountered people my age who were “personally against abortion,” but did not want to “inflict their views” on women.

My favorite example of that occurred the day after Alabama last year passed its abortion ban, the Human Life Protection Act, and students at my Christian-based college went to social media to share images that said “Men should not make laws about women’s bodies.”

It’s this “silence of our friends” that will be noted in the future when students read about abortion in America.

Abortion, like every other human rights violation before us, will also become illegal one day. It is that assurance that gives me hope to continue to demonstrate on the “unpopular” side against misguided movements like the Women’s March.