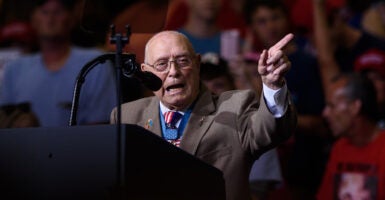 Hershel "Woody" Williams, the last surviving Marine from the Battle of Iwo Jima, died in June at 98. As our military struggles to meet its recruitment goals, the future of democracy depends on those willing to follow in his footsteps. Pictured: Williams leads the crowd in the Pledge of Allegiance prior to the arrival of President Donald Trump at a campaign rally on Aug. 3, 2017, in Huntington, West Virginia. (Photo: Justin Merriman/Getty Images)

Aaron Eudaimon is a member of the Young Leaders Program at The Heritage Foundation.

America just lost another hero from “the greatest generation.”

Enlisting in the Marine Corps in 1943 at the age of 19, Williams was a demolition corporal when he and his Marine battalion landed on the beaches of Iwo Jima on Feb. 21, 1945.

Williams was awarded the Congressional Medal of Honor for his “valiant devotion to duty” during the battle, where he repeatedly charged through intense enemy fire with his flamethrower to incinerate a series of Japanese machine gun posts.

For four unimaginable hours, Williams would hastily prepare flamethrowers at his headquarters and return to the barren wasteland, dodging barrages of Japanese bullets while carrying loads of equipment. By the end of the day, he would destroy seven of the Japanese gun posts.

Williams would continue fighting on Iwo Jima even after suffering a leg injury.

His unyielding heroism allowed for Marine tanks and infantry to funnel through his scorched paths to advance through the Japanese holdouts and claim the island after a grueling five weeks of death and destruction.

At the end of the war, Williams was awarded the Medal of Honor by President Harry Truman at the White House. His devotion to continue fighting even after incurring a leg wound also earned him a Purple Heart, a military decoration awarded to those who are wounded or killed during service.

Later that year, Williams left active service and enlisted in the Marine Corps Reserve, retiring at the rank of chief warrant officer 4 in 1969 after 20 years of service.

To continue his career of public service, Williams worked at the Veterans Administration as a veterans service representative for 33 years. He also co-founded the Woody Williams Foundation, an organization dedicated to supporting Gold Star families—those who lost loved ones in active duty service in the U.S. armed forces.

Together with his foundation, Williams helped establish over 100 memorial monuments for Gold Star families across the U.S. The foundation has plans to construct 72 more of these monuments even after Williams’ death.

Before his death, Williams was the last surviving serviceman of the 27 Marines and Navy sailors who were awarded the Medal of Honor following their fearless actions at Iwo Jima.

His passing is a grim reminder that we are slowly losing the last of the heroes who bravely fought for freedom and democracy around the world in the biggest conflict the world had ever seen.

Americans should immortalize the valiant deeds of Williams and all those who gave the ultimate sacrifice to protect and defend this great nation and the highest ideals for which we stand. His courageous actions at Iwo Jima serve as a call to service for all Americans.

This is a crucial point in American history when the need for Americans to answer that call has never been more critical. Americans must realize that without monumental figures like Williams, our cherished values of freedom and democracy are threatened by dangers both foreign and domestic.

With China overhauling its military with modern technology, Russia invading a sovereign Ukraine in a war that has already robbed thousands of lives, and all branches of the U.S. military currently struggling to meet their 2022 recruitment goals, the U.S. faces challenges like never before.

The next few decades will test the resilience of American democracy as our adversaries continue to challenge freedom across the world.

The future of democracy is dependent upon the willingness of Americans to follow in the footsteps of Williams and others like him in the defense of a free world.

His story should inspire us all to pursue a life dedicated to service, as freedom is never free. His selflessness at Iwo Jima serves as a testament that any American can stand up for what is right.