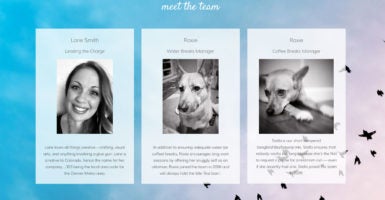 Lorie Smith, a graphic designer from Colorado, asks a federal court for relief from a state law that she says would force her to violate her religious beliefs about marriage. (Photo: 303 Creative)

Lorie Smith, a graphic designer from Colorado, wants to create custom websites and designs for couples who are getting married. However, Smith, an evangelical Christian, wants to create them only for marriages between one man and one woman.

Being compelled to create websites celebrating same-sex marriages, she says in a lawsuit filed Tuesday, would force her to violate her religious beliefs.

Under Colorado’s public accommodation law, businesses that offer wedding-related services for heterosexual couples must do the same for same-sex couples. If they fail to do so, the state could charge them with discrimination based on sexual orientation and impose a punishment.

Rather than give up on getting into the wedding industry, Smith decided to be proactive and file what’s called a “pre-enforcement challenge” to prevent the state government from taking adverse action against her business, 303 Creative LLC.

The Daily Signal asked to interview Smith, who is represented by Alliance Defending Freedom, a leading legal nonprofit that advocates Americans’ right to express their religious beliefs. But Jeremy Tedesco, Smith’s lawyer, said that speaking out about her case could get her in more legal trouble, under the anti-discrimination law.

“The Colorado law includes what we call a publication ban, which says you can’t directly or indirectly indicate in any way that someone will be unwelcome or unsolicited at your business on the basis of the characteristics that are protected in the law,” Tedesco said, adding:

That’s an incredibly broad prohibition. This really has no limit, directly or indirectly. What it means is, you run the risk of violating the law if you’re someone like Lorie Smith, and put on your website, ‘I do wedding websites to promote marriage is between one man and one woman because of my religious beliefs, but also because of my religious beliefs, I can’t do any other kind of marriage websites.’ That violates the law. You can’t explain your religious beliefs on your website, you can’t explain the religious reasons for why you’ll only do websites [for marriages] between a man and a woman, why you won’t do websites promoting same-sex marriages.

For that reason, Smith has yet to enter the wedding industry, despite doing mockups of wedding websites and designs. Her website currently reads:

Smith also hasn’t spoken publicly about why she’s stepping forward and challenging Colorado’s anti-discrimination law, risking the kind of backlash that Christian owners of bakeries and other wedding-related businesses have faced.

The Daily Signal sought comment from the Colorado Department of Regulatory Agencies, which oversees the state’s public accommodations law. A spokeswoman said the agency is unable to comment on pending litigation.

Legal action was necessary because the “threat” against Smith is real, her lawyer said.

“Colorado has enforced the [public accommodation] law against Jack Phillips,” Tedesco said, suggesting the same would be done to Smith “the minute” she enters the wedding industry.

Phillips, owner of Masterpiece Cakeshop in Lakewood, Colorado, declined to make a cake for a same-sex wedding in 2012. The Colorado Civil Rights Commission found him guilty of discrimination based on sexual orientation.

Phillips, also represented by Alliance Defending Freedom, now seeks to have his case heard by the U.S. Supreme Court.

The commission found Phillips guilty, the lawyer said, yet determined that three other Denver “cake artists” were not guilty of discrimination for declining to make a cake for a Christian customer who wanted to celebrate his religious opposition to same-sex marriage. He said:

Tedesco also cited the case of Aaron and Melissa Klein, former owners of Sweet Cakes by Melissa in Gresham, Oregon. In July 2015, Oregon Labor Commissioner Brad Avakian issued a preliminary ruling finding the Kleins guilty of discrimination and accused the couple of violating that state’s own publication ban.

Avakian decided that the Kleins “couldn’t even publicly discuss their religious beliefs about marriage and opposing same-sex marriage, or they’d be in violation of the law,” Tedesco said.

Avakian ordered the Kleins to “cease and desist” from speaking publicly about not wanting to bake cakes for same-sex weddings based on their Christian beliefs.

The cease-and-desist order came after the Kleins did an interview with Tony Perkins, president of the Family Research Council. During the interview, Aaron Klein at one point said: “This fight is not over. We will continue to stand strong.”

If Smith were to speak with the news media about her case, Tedesco said, similar actions could take place.

“She’s not talking to the media because she would be in violation of the law if she talked about the facts of her case, her religious beliefs, and the religious beliefs that required her to say, ‘I can’t celebrate same-sex marriage with my artistic talents and business,’” he said.

Smith filed the lawsuit in the U.S. District Court for the District of Colorado. Once judges set deadlines for the Civil Rights Commission to respond, Tedesco said, “we can hopefully get a quick ruling one way or the other.”