In a Period of Brute Force, China Increases Its Military Budget Yet Again 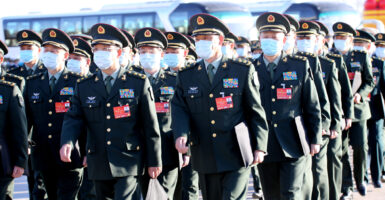 The Chinese Communist Party announced this week it will increase the budget for the People’s Liberation Army by 7.1%. Pictured: Deputies walk to the Great Hall of the People ahead of the opening meeting of the fifth session of the 13th National People's Congress on March 5 in Beijing. (Photo: Guo Junfeng/VCG/Getty Images)

The Chinese Communist Party announced this week it will increase the budget for the People’s Liberation Army by 7.1%.

The announcement occurred at the opening session of the National People’s Congress—the annual rubber-stamp parliament. Thus, it is just a matter of time before the extra resources start following to the People’s Liberation Army.

This increase continues the trend of sustained increases in the Chinese military budget. Since 2018, the Chinese Communist Party has increased the People’s Liberation Army budget by over 28% with consecutive annual increases of between 8.1% and 6.6%.

One of the party’s favorite propaganda vehicles, the Global Times, reported that “the proposed defense budget would mark the single-digit growth for seven consecutive years since 2016 and also a return to a 7-plus percent increase.”

The return to an above 7% increase comes after successive years of double-digit growth, ranging from 10.7% to 13% in the earlier part of the 2010s. Further, the People’s Liberation Army is able to get more bang for its buck. As just one example, the Chinese labor costs are substantially lower than American labor costs, enabling them to field a bigger force while spending less.

Additionally, China can impose its defense costs on its state-owned companies, shielding the People’s Liberation Army budget from these expenses.

By any measure, the Chinese Communist Party has been steadily modernizing and investing in its armed forces with the overall goal of having a fully mechanized and informatized military by 2027.

This is an assessment shared by the Office of the Director of National Intelligence in its recently released annual threat assessment, which stated that “Beijing is accelerating the development of key capabilities it believes the People’s Liberation Army’s needs to confront the United States in a large-scale, sustained conflict.”

The assessment further elaborates that “China will continue pursuing its goal of building a world-class military that will enable it to secure what it views as its sovereign territory, establish its preeminence in regional affairs, and project power globally while offsetting perceived U.S. military superiority.”

Clearly the Intelligence Community believes that the Chinese Communist Party has the will to leverage brute force to impose its ideology, as exemplified by its brutal crackdown in Hong Kong.

Today we are watching what an undeterred authoritarian power is capable of doing to subjugate its democratic neighbor in Ukraine, as Russian troops destroy cities and target civilian populations indiscriminately.

One of the lessons to be learned is that dictators like Russia’s Vladimir Putin are only deterred by the prospect of a strong military response from determined allies. If we hope to deter China from similarly coercing its neighbors, a strong and capable U.S. military will be necessary.