What China Is Learning From Putin’s Ukraine Invasion 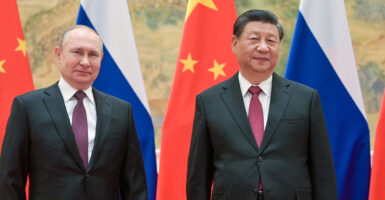 Russian President Vladimir Putin could never rest easy without the Russian flag flying over Kyiv. Never doubt for a second that Chinese President Xi Jinping feels the same way about Taiwan. The president of China certainly hopes, in his lifetime, to see the communist flag flutter above Taipei.

So the obvious question is whether the current conflict holds any lessons for China and its cause. It does—but they might not be the ones Beijing expected.

Putin would not have moved on Ukraine if he didn’t think a weakened, distracted, and divided Europe, paired with a feckless American president, would not stand in his way.

The response from Beijing, of course, was—what’s not to like? Putin was doing Xi’s dirty work for him. A rattled Europe would be more open to Chinese efforts to expand their influence in Europe, as well as push out and marginalize the Americans.

But that doesn’t necessarily mean that the time is right to take Taiwan. For one thing, China already thinks the West is weak. Nothing that has happened in the last few days gives it any reason to advance its own timeline.

Consider as well the logistics problem. As Asia expert Walter Lohman has noted, “Unlike Russia’s invasion of Ukraine, a Chinese move on Taiwan involves it getting past hundreds of miles of water.” If Beijing wants to take Taiwan by force, it won’t act until it’s convinced it can win decisively and quickly. Beijing thinks the West is only going to get weaker, so time is on its side.

The lessons Xi and his cronies are learning, however, might not be the ones they saw coming.

What happens when victories are not quick and decisive? Putin may well conquer Ukraine, but if he does, it will only be after an expensive, debilitating campaign that devastates his conquests while delivering a staggering hammer blow to his own economy. Win or lose, Putin will have a big burden to bear.

Beijing is also learning lessons about the value of Putin as an ally. Rather than dividing and weakening Europe, Putin has given NATO a reason to be NATO again. European countries are stepping up to spend more on defense. Congress is likely to press the Biden administration to strengthen both the U.S. military’s conventional and strategic posture.

Beijing has also had to spend geopolitical capital to side with Russia. Fending off responsibility for the Uyghur genocide (which it can hide behind the Great Firewall) is one thing, but defending Russian war crimes, which play out on Twitter and YouTube, guts China’s credibility of claims that it’s a “responsible” power.

Further, Beijing’s buddy in Moscow is going to be an economic basket case. Even if Beijing wants to bail Russia out with its patent debt trap, that is going to cost a lot of money—likely more than the Chinese Communist Party can spare. Buying up Russia at fire-sale prices might be more than even Xi can manage.

Here is an even bigger lesson Xi did not anticipate. He has been thrilled to watch the West commit economic suicide with its “climate action” plan that impoverishes its economies (while doing little to address climate issues) even as the China economy thrives, powered by ever more coal-fired plants. What if this war actually causes the West to wake up and adopt policies that deliver reliable, affordable, and abundant energy (without Russian oil and gas)?

Let’s be honest. Even before Putin attacked Ukraine, Beijing was right to think the West was in the process of geopolitical suicide. Not one Western leader showed Putin any backbone. They still cling to their climate-action nonsense. We still talk a lot about protecting supply chains, and then Congress offers to subsidize costs for high-tech companies knee-deep in China.

Yet the resistance in Ukraine has stirred some buried truth in the West, like being dead asleep and then shocked awake—a reminder that if we don’t defend our freedom, safety, and prosperity, no one will.

The lesson for Beijing may be to wait a bit. It may well decide to wait and see what happens after the Ukraine war: if the West returns to its geostrategic slumbers or if defending the free world becomes a new reality in the post-modern world. You can bet Xi will be rooting for the former.