What We Saw When Protesters Came to Homes of Kavanaugh, Roberts 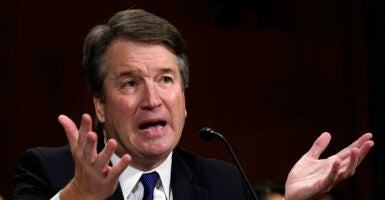 A week after an assassination attempt on Supreme Court Justice Brett Kavanaugh, a small group of 17 protesters made their way to Chevy Chase, Maryland, on Wednesday to march to his home as well as the home of Chief Justice John Roberts, something they have done each week for more than a month.

The event follows the murder attempt on June 8, when a California man was arrested after telling authorities he was going to try to kill Kavanaugh and was present in Kavanaugh’s neighborhood.

The protesters gathered at a small market about 10 minutes away from Kavanaugh’s house. When The Daily Signal asked them if they felt protesting in front of the justices’ homes had contributed to the assassination attempt, they were adamant that the two were unrelated.

Eventually, the group began to make its way to Kavanaugh’s house. It chanted and banged drums the whole way there. The protesters carried LGBTQ+ pride flags, “Don’t Tread on My Uterus” flags, and signs with caricatures of the justices labeled “Liar.” One protester dressed in a red “Handmaid’s Tale” cape.

Eventually, the marchers reached Kavanaugh’s home. Law enforcement was present and lined the yards and sidewalks of the justice’s home. Shouting “Hey hey! Ho ho! Kavanaugh has got to go!” and “Regulate guns, not bodies!” the protesters circled around the justice’s neighborhood several times.

The protesters then reached Roberts’ house. Like at Kavanaugh’s house, they marched around the block multiple times and referred to the justices as “Christo-fascists” promoting a “theocracy.”

The marchers then made their way back to Kavanaugh’s house. They marched around his block and sang a song referring to Kavanaugh as a “rapist” and “fascist.”

The end of the protest came about an hour and half after it began. The protesters were done for the night, but they plan to return next week.