What I Saw at ‘Blockade the Supreme Court’ Protest 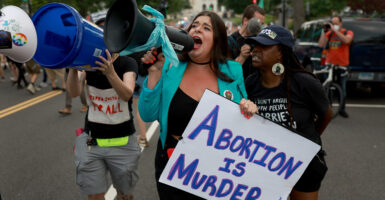 Protesters on both sides of the abortion issue march to the Supreme Court on Monday in Washington. (Photo: Joe Raedle/Getty Images)

As America awaits an imminent Supreme Court ruling in the case of Dobbs v. Jackson Women’s Health Organization and the future of legalized abortion in America, a group of angry pro-abortion protesters made its way to Capitol Hill on Monday and attempted to “blockade” the court.

A small group of demonstrators gathered Sunday night outside the court to prepare for the protest the following day. Some of those protesters ended up sleeping in front of the court.

At about 7 a.m. on Monday, several different groups gathered in Stanton Park about a half mile from the Supreme Court. Climate change and anti-death penalty groups joined pro-abortion demonstrators.

At about 8 a.m., the protesters left the park. Leading the group was climate change group Extinction Rebellion, who held a giant banner reading, “Our home is on fire.”

They were met near the park by pro-life demonstrators, and the two groups began to shout aggressively at one another.

Eventually, the dueling demonstrators made it to the Supreme Court. Along the way, various pro-abortion protesters split from the main group to block off different streets surrounding the court. Police presence was heavy around the court.

One protester, who said his name was Derek and claimed he worked in the D.C. mayor’s office, became extremely agitated and began harassing pro-life activists and conservative journalists.

Returning to the scene directly in front of the court, a group called Rise Up 4 Abortion Rights protested in favor of abortion next to a pro-life group. Fencing and police separated the two, though they continued to shout at each other.

School groups visiting Washington periodically passed by the court. One group stopped and joined the pro-abortion side. When The Daily Signal asked their teacher if she had told them to join them, she said they did it independently.

However, the teacher could be seen chanting with the pro-abortion group, and several students seemed visibly uncomfortable participating.

After a series of five decisions, the high court announced it was done with rulings for the day. Upon hearing the news that the Dobbs decision wouldn’t be announced, the vast majority of the protesters left the court.