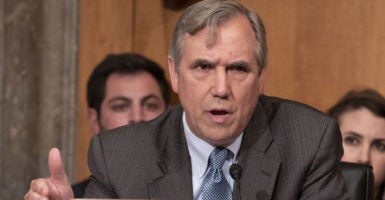 Sen. Jeff Merkley, D-Ore., has filed a lawsuit arguing that the confirmation process for Judge Brett Kavanaugh has obstructed his constitutional duties as a senator. (Photo: Alex Edelman/CNP/AdMedia/ Sipa/Newscom)

Democratic senators are pulling out every stop to block Brett Kavanaugh from joining the Supreme Court.

Sen. Jeff Merkley, D-Ore., says he will seek a federal court injunction to, as Politico described it, “stop a final vote on Brett Kavanaugh, asserting an obstruction of his constitutional duty to advise and consent on nominees.” According to Oregon media, “Merkley asserts he’s not being given adequate time to do his job of reviewing Kavanaugh’s qualifications.”

It is true that the Senate received a significant amount of information and material regarding Kavanaugh’s legal career: 10,000 pages of legal opinions, 17,000 pages of speeches and articles, and hundreds of thousands of pages related to his work in the Office of Independent Counsel and the White House Counsel’s Office in the George W. Bush administration.

But here’s the thing: Merkley announced his opposition to Kavanaugh’s nomination on July 9, the same day that President Donald Trump announced it. Merkley tweeted then: “Make sure your Senator knows that you oppose the nomination of Brett Kavanaugh.”

Brett Kavanaugh could give @realDonaldTrump the power to pardon himself. This is unacceptable. Make sure your Senator knows that you oppose the nomination of Brett Kavanaugh. #WhatsAtStake pic.twitter.com/WSMShLLXpT

That was more than 11 weeks ago. The same call to political arms opposing Kavanaugh remains on Merkley’s website.

If none of the information about Kavanaugh’s record was relevant to Merkley on the day his nomination was announced, why would Merkley bother poring over that record now?

Merkley also argued on the Senate floor that such a court mandate was necessary because the Judiciary Committee limited access to certain documents by deeming them “committee confidential.”

But Merkley failed to disclose one important fact. Chairman Chuck Grassley, R-Iowa, opened access to this group of documents to all senators—including Merkley—rather than only to Judiciary Committee members, as is the typical practice.

So, despite having announced his opposition to Kavanaugh, Merkley wants a court to give him access to documents about Kavanaugh’s legal work to which he already has access.

The Constitution gives the power to nominate judges to the president and, subject to the “advice and consent” of the Senate, the power to appoint them. Every word about the appointment process is found in Article II, about the executive branch. The one branch that has no role in appointments whatsoever is the judiciary.

Merkley must know that no court, at any level, anywhere in America will entertain his request. Yet his bizarre move does reveal one very important thing. Liberals today want the judiciary, the one branch that the American people do not elect, to have so much power that judges can dictate how the other branches exercise power that belongs exclusively to them.

That’s going to be difficult since he long ago abandoned any pretense that he’s interested in anything related to Kavanaugh beyond a single word: No.