Fight Over Kavanaugh Proves Supreme Court Has Become Too Powerful 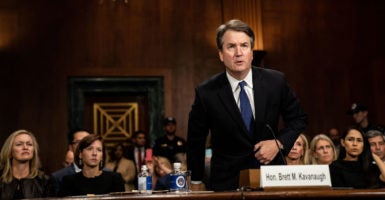 The stakes are high—very high.

The confirmation process for Supreme Court nominee Brett Kavanaugh has been a battle royale.

But why should one government official’s position be so existentially important? Yes, control of the Supreme Court hangs in the balance, but that raises the question as to why the court itself is so powerful.

Could it be that the answer to that question tells us something about our increasing inability to govern ourselves as a free people?

Let’s face it. Ever since at least the 1960s (and frankly even before), we have increasingly allowed the Supreme Court to decide controversial issues we have been unwilling to solve legislatively.

From civil rights to abortion to the issue of gay marriage, the high court has ruled on key issues well outside the legislative process. New constitutional rights were created out of whole cloth.

If abortion couldn’t be legalized at the ballot box, or if gay marriage could not be made lawful by Congress or the states, a majority of the Supreme Court—a mere five people—would step in and do it for us. Using the power of judicial review, a new policy would be imposed simply by redefining it as a constitutional right.

No single government official outside the president should be so important that his or her replacement could shift the course and destiny of the nation. And yet that is precisely the case in replacing retiring Justice Anthony Kennedy.

If Kavanaugh is confirmed, he will decide the balance of power of an institution that has arguably become more powerful than the Congress and as powerful (at least) as the presidency.

>>> Purchase Kim Holmes’ book, “The Closing of the Liberal Mind: How Groupthink and Intolerance Define the Left”

The very insularity that the Founders had intended to protect the high court from the political passions of the times now serves those passions outright. What was originally intended in the courts as a brake on mob rule has today, in the hands of liberals, become an accelerator.

It is not uncommon for Supreme Court justices to decide cases based on what they think—perhaps “divine” is a better word—the people or legislators really want.

Perhaps based on opinion polls, for example, Kennedy may have thought he was merely delivering what the people wanted when he decided in favor of gay marriage. But in doing so, he was overturning actual democratic votes that over the past 10 years showed a 60.93 percent to 39.07 percent majority against gay marriage when the issue had been placed on the ballot.

As I explain in my book, “The Closing of the Liberal Mind”:

Ultimately, what is at stake is the rule of law. There are people in America today who want the Supreme Court, and courts in general, to become little more than political tribunals to enforce their ideology and political prejudices. Due process and respect for the rules and limitations imposed by the Constitution on the judiciary are thrown aside for politics and power.

This is exceedingly dangerous. It is how authoritarian regimes operate, not democracies governed by the rule of law. It is today arguably the greatest threat to the liberties of all Americans.

That is why, now more than ever, the court must respect not only the original intent of the Constitution—what Justice Antonin Scalia called “originalism”—but the need to restrict the policy activist role played by the court.

Nothing less is at stake than our ability to govern ourselves as a free people.

A previous version of this article was published in 2016.