How Justice Kavanaugh Will Change the Supreme Court 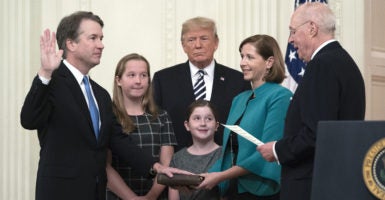 Hans von Spakovsky predicts that in replacing Anthony Kennedy, newly minted Justice Brett Kavanaugh will buck the high court's propensity for creating constitutional rights where there were none in the past. (Photo: Polaris/SIPA/Newscom)

Brett Kavanaugh was sworn in as the newest justice on the U.S. Supreme Court on Saturday and he will begin hearing oral arguments on Tuesday, Oct. 7, when the court comes back from its Columbus Day holiday.

Those who expect rapid, radical changes in the jurisprudence of the court are likely to be disappointed. But in the long run, there seems little doubt that Kavanaugh’s addition will lead to stronger enforcement of constitutional rights such as religious liberty, the right to bear arms, greater adherence to limits on congressional and executive power, and, perhaps most importantly, a lesser likelihood that the court will create new rights not explicitly recognized in the Constitution.

Much has been said about the unfair and downright nasty tactics used by some Democratic senators and their allies during Kavanaugh’s confirmation battle. But the reason they resorted to these tactics is because the federal courts have become so important in their quest to change America into their version of a progressive utopia.

For many decades, liberals have been using the federal courts to implement the changes they have been unable to achieve through Congress and state legislatures. When they cannot convince voters and legislators, they have resorted to federal judges to ignore the law and ignore the Constitution and implement their social policies by judicial fiat.

The legal battle over the proposed Millennium coal export terminal in Longview widened into a much broader national issue Tuesday.

Democrats still have four solid liberal justices on the court who are likely to vote the way liberals want them to on most issues, particularly “social justice” issues like abortion, racial preferences, gay marriage, and campaign finance. From their perspective, there is only one politically acceptable view on those issues

Kavanaugh is replacing Justice Anthony Kennedy, for whom Kavanaugh clerked. On many issues, Kennedy was a staunch supporter of the Constitution. He certainly voted to protect the First Amendment in numerous cases coming before the court, particularly in the area of campaign finance law.

He wrote the opinion in Citizens United, the 2010 decision that threw out limits on independent political speech and expenditures, a decision that has been almost uniformly (and unfairly) condemned by liberals.

Kennedy was the key fifth vote in District of Columbia v. Heller, the 2008 decision that upheld the right of every American to keep and bear arms under the Second Amendment.  So, there are many cases where Kennedy was the fifth voted needed to uphold the rights of Americans under the Bill of Rights and other amendments to the Constitution.

In fact, in the last term of the court, he was the crucial fifth vote in 19 important cases, including the decisions upholding President Donald Trump’s travel ban and throwing out an Illinois law that forced government employees to pay dues to unions they refused to join and that expressed views that they did not support.

On the other hand, since the Heller case and the court’s follow-up decision in McDonald v. City of Chicago, the court has avoided Second Amendment cases. This has allowed jurisdictions all over the country to impose restrictive gun laws and regulations, particularly on concealed carry rights, that have been upheld by the lower federal courts.

With Kavanaugh’s strong record on the Second Amendment, for which he was criticized by Democratic senators, one can hope that the Supreme Court will finally take up these cases and reinforce its precedent.

Kennedy also had a habit of occasionally siding with the liberal wing of the court and creating nonexistent rights on politically correct social issues such as capital punishment, abortion, and gay rights.

The point here is not that one side of these issues should prevail. The point is that many of these are issues that are not dealt with in the Constitution and should be decided by the legislative process or by the people directly, not the courts.

Take gay marriage. Kennedy was the essential fifth vote in Obergefell v. Hodges, the 2015 decision that created a constitutional “right” to gay marriage. Marriage laws have always been a prerogative of state governments, not the federal government.

Gay marriage was being dealt with by state legislatures, as some states decided to recognize it and others did not. As Justice Antonin Scalia said in his scathing dissent, overriding the rights of the states and their voters to decide this issue was a fundamental “threat to American democracy.”

Even though Kennedy often voted against what liberals wanted the court to do, he voted with them often enough that they continued to see the federal courts—and in particular, the Supreme Court—as their substitute venue for implementing the social policy they could not achieve through the democratic process. With Kavanaugh, that substitute venue will likely disappear.

That, in turn, could diminish the power of the Supreme Court over the political, social, and cultural affairs of the nation. And that would be a good thing.

The Supreme Court was never envisioned by our Founders as the final arbiter and decision-maker on all affairs, foreign and domestic. It is the court’s extension of its power into areas where it should not be exercising power that has played a large role in turning the confirmation of its justices into a rancorous political campaign that diminishes the court and damages the pursuit of justice in the federal courts.