Netflix Cracks Down on Employee Activism. Is Woke Capital in Retreat? 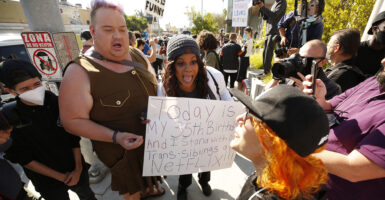 Not everything that goes woke goes broke. But if you’re going broke, you better ditch the woke.

Netflix announced that it lost over 200,000 subscribers in the first three months of the year and expects to lose millions more by the end of July. The company also lost tens of billions of dollars in market value after these announcements.

Clearly, Netflix is operating on much tighter margins than it once did.

The next step it took was remarkable given the collective left-wing turn of corporate America.

Netflix released a “culture” memo to employees that included sections telling them that if the shows or artists in the company’s programming offends them, they will have to deal with it or find another job.

“Not everyone will like—or agree with—everything on our service,” the memo says in a section about artistic expression. “While every title is different, we approach them based on the same set of principles: we support the artistic expression of the creators we choose to work with; we program for a diversity of audiences and tastes; and we let viewers decide what’s appropriate for them, versus having Netflix censor specific artists or voices.”

The memo went even further, saying, “If you’d find it hard to support our content breadth, Netflix may not be the best place for you.”

This appears to be a response to protests of Dave Chappelle’s Netflix special “The Closer,” which provoked employee walkouts.

In the special, Chappelle made some—by his standards—rather mild jokes about transgender ideology. Apparently, the most “offensive” thing he said was that “gender is a fact.”

Woke zealots don’t have a sense of humor. And they don’t like jokes, as a counterprotester found out when he attended the Netflix walkout.

The disciples of tolerance don’t tolerate even the hint of poking fun at the things they care about. For all their talk about protecting marginalized groups, they are firmly committed to marginalizing, canceling, and destroying anyone who disagrees with their cherished narratives.

Given this reality, it’s hard not to see how this is problematic for an entertainment company trying to appeal to diverse audiences and not just the cult of diversity, equity, and inclusion.

Netflix is doing even more than just cracking down on out-of-control employees. Several woke shows are also reportedly being shelved. The list includes Ibram X. Kendi’s “Antiracist Baby,” a children’s program that was going to be aimed at preschoolers.

The show, based on Kendi’s children’s book of the same name, was meant to “leverage the power of earwormy songs to empower kids and their caregivers with simple tools to uproot racism in ourselves and society.”

Darn, I’m sure the kids were really looking forward to that one.

Perhaps this is a sign of at least some kind of internal brake being put on woke capital after receiving some serious external pressure? The Netflix financial problems certainly seem to be a factor. But maybe there is more to this.

Netflix has certainly been all about joining the cultural revolution. It partnered with former President Barack Obama and virtue signals on all manner of woke causes.

A lot of Netflix programming has reflected this, as entrepreneur Elon Musk recently noted on Twitter.

There are likely a whole host of other issues going on at Netflix, too, but something certainly has changed at the company.

Unlike even a few years ago, major corporations are starting to face some consequences for jumping into politics and allowing themselves to be commandeered by social justice warriors.

You could call this the Disney, or perhaps the DeSantis, effect.

With a troubled economy and more potential for serious blowback, it’s possible that companies are becoming warier about jumping headfirst into the far-left side of the culture war. Especially given that those same employees are willing to hold the company hostage the second their fragile feelings are hurt, or even when the company just decides not to publicly endorse their causes.

This dynamic is a common one on college campuses. Radical students and administrators have essentially destroyed genuine free speech in higher education and have created a toxic environment in which the most extreme voices are elevated above all others.

Student tantrums are generally rewarded. College administrations either fail to do anything about student-led struggle sessions or actively promote them. They expect the publicly-funded gravy train to continue no matter what. If they fail, they look for a bailout.

That perverse cultural dynamic has moved on to all other powerful institutions. Where do you think Netflix and most other big companies draw their staff from? The real world didn’t change the crybullies, they changed the world, and for the worse.

However, there is at least some incentive for companies to keep a lid on their employees’ extreme behavior and not to enrage half the country. A recent poll showed that Disney’s popularity has collapsed after it came out against Florida’s parental rights bill and brawled with Gov. Ron DeSantis. Disney picked this fight seemingly due to pressure from the media and employees.

When a company has similar poll numbers to a politician, even a popular one, you know it’s in trouble.

Now, what’s happening with Disney and Netflix just may be a blip on the left-wing corporate lurch. It’s not inconceivable that these massive companies have decided it’s worth backing woke causes and empowering woke employees even if they lose a sizable chunk of customers—or in the case of Netflix, alienate top celebrity talent like Chappelle.

It may also suggest at least an opening to blunt the transformation occurring within big business, which has dramatically ratcheted up the consequences of our culture war battles.